Earlier this year, Apple announced that as part of an effort to power all of its data centers with 100% renewable energy it would be building a second 20-megawatt solar farm a few miles away from its new Maiden, North Carolina data center. The new solar farm would complement the previously announced 20-megawatt facility that appears to be nearing completion directly across the street from the data center. 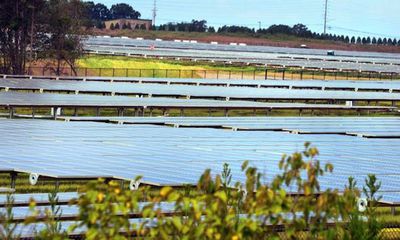 Solar panels at Apple's first North Carolina solar farm (Source: Jeremy Detter/Hickory Daily Record)
The location of the second solar farm was not immediately revealed at that time, but the Hickory Daily Record now reports (via 9to5Mac) that Apple has just purchased 200 acres land for the solar farm at a cost of $3 million. The plot is located nearly 15 miles from the data center and is being co-located with a new North Carolina Data Campus designed to attract other companies in need of data center capacity.

Apple recently closed on the land purchase that includes a tract of 218.885 acres and another tract of 0.251 acres, according to deeds and a plat book at the Catawba County Register of Deeds. [...]

The Conover site is the only other property Apple now owns in the area in addition to the main data center campus and solar farm in Maiden. With the two solar farms and a bio-gas-powered 5-megawatt fuel cell installation, it will be the largest non-utility installation in the country, according to Apple. The company expects to generate 124 million kWh a year, which would power the equivalent of 10,874 homes, Apple says on its website.

Several local governments have banded together to create the new North Carolina Data Campus, which has purchased an additional 55 acres for its purposes at the site. Facebook and Microsoft had reportedly looked at the site as a potential data center, but ultimately selected other locations due to a lack of existing infrastructure. The new data campus entity will work to provide the necessary infrastructure in order to make the site more appealing to other companies.

HarryKeogh
Unfortunately, they used the Maps app on iOS 6 and accidentally placed the solar panels on Neptune.
Score: 9 Votes (Like | Disagree)

Solar? What a bunch of wimpy liberals.

If they really wanted to generate some power, they'd built a big coal power plant right next to the data center. The smog will keep people from getting to close to the data center
Score: 5 Votes (Like | Disagree)

Can't wait to see how many acres of forest will be bulldozed for Apple's next "green" energy source.


Do your homework so you don't appear to be stupid. I drive by the site on my way yo Atlanta on a regular basis. Much of the site was fields. The number of trees that came down was minimal. The yellow outline is what Apple bought. Many of the trees are still there.
Score: 3 Votes (Like | Disagree)

gigabytex
Can't wait to see how many acres of forest will be bulldozed for Apple's next "green" energy source.
Score: 2 Votes (Like | Disagree)

wutang61
what a waste of land space.
Score: 2 Votes (Like | Disagree)

north carolina is below average for solar
http://www.wri.org/image/view/11262/_original

no one ever heard of florida? sunshine state

because NC has low sunshine this means to get the same amount of power as would be obtained in arizona, they had to double the size of the solar farm.
Score: 1 Votes (Like | Disagree)
Read All Comments