For the first time since the opening of the iTunes Music Store in 2003, digital music sales have decreased year-over-year, reports Billboard.

In 2013, sales of individual digital tracks declined 5.7% from 1.34 billion units to 1.26 billion units, while digital album sales fell to 117.6 million units from 117.7 million units in 2012. The report notes that industry executives have cited music streaming services for the regression in digital music sales.

While industry executives initially refused to attribute the early signs this year of digital sales weakness to the consumer's growing appetite for streaming, in the second half of the year many were conceding that ad-supported and paid subscription services were indeed cannibalizing digital sales.

While SoundScan has not yet released its annual streaming numbers numbers, so far industry executives have been reporting that the growth in streaming revenue has been offsetting the decline in digital sales revenue.

Music streaming providers experienced a surge in popularity during 2013, as major services such as Spotify, Pandora, and Rdio announced new free listening tiers for users in the wake of Apple launching iTunes Radio. Apple is also said to be expanding iTunes Radio service to the U.K, Canada, Australia, and New Zealand within the first few months of 2014, ahead of competitor Pandora’s own expansion.

The report notes that industry executives have cited music streaming services for the regression in digital music sales.

Or we are becoming more selective and won't buy just any old crap the industry produce.
Score: 37 Votes (Like | Disagree)

Nevaborn
On another note Blurred Lines is possibly the worst song I've heard in a decade, it is a rape anthem that is seedy and has a horrid message. I cringe when I hear it. The fact it has been so popular says a lot about society I suppose and should be a bit disconcerting.
Score: 29 Votes (Like | Disagree)

Plutonius
Music this decade has been terrible and you can only buy so many old artist.
Score: 26 Votes (Like | Disagree)

Nevaborn
To be fair though 2013 wasn't a stellar year for music, there was only a handful of songs that came out I felt worth buying. Also Digital albums are very expensive still compared to physical copies which offer superior sound quality and the tactile experience of physical media which people do still enjoy. Also a lot of music is still not available to download atleast not through legal channels so people fall back to ripping physical copies instead.
Score: 21 Votes (Like | Disagree)

What happens to song writing? 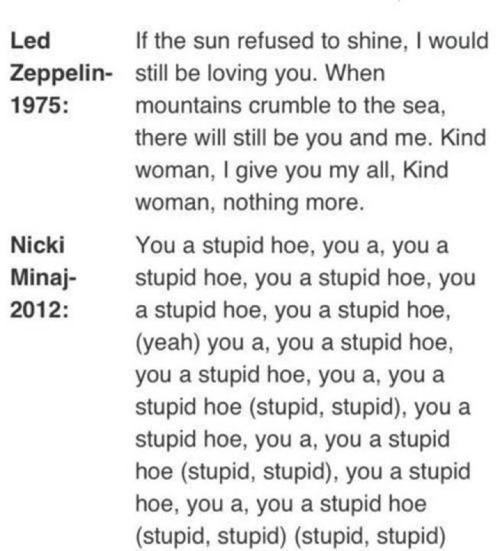