Following last week's news that iTunes Radio would be expanding to Canada within the next few months, Bloomberg is reporting that Apple plans expand the service to the U.K., Canada, Australia, and New Zealand by early 2014, ahead of competitor Pandora’s own expansion. The expansion could also include Nordic countries. 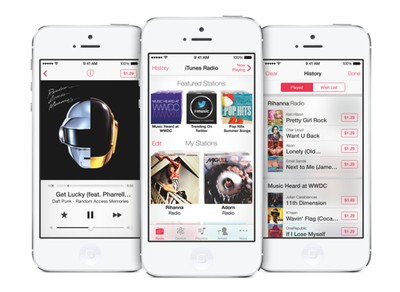 Apple Inc. plans to expand iTunes Radio to English-speaking countries outside the U.S. by early 2014, beating industry leader Pandora Media Inc. to the U.K. and Canada, people with knowledge of the situation said.

ITunes Radio is also set to start early next year in Australia and New Zealand, where Pandora already operates, said the people, who asked not to be identified because the plans aren’t public. Nordic countries are also being targeted in the same time frame, the people said.

According to Bloomberg, Apple is able to roll out its service to additional countries more quickly than Pandora because it has already signed international rights deals with Universal Music Group and other record companies. Pandora, however, relies on rights "granted by government entities" which limits its service to the U.S., Australia, and New Zealand.

First introduced alongside iOS 7 in September, iTunes Radio is currently limited to listeners in the United States, though users in other countries can skirt restrictions with a U.S. iTunes account.

Apple's senior vice president of Internet software and services Eddy Cue has said that launching iTunes Radio worldwide is a top priority for the company, with Apple ultimately aiming to have the service "in more than 100 countries."

Canada is french speaking country too but Apple seems to ignore it. The job posting Apple HR issued made no mention at all about knowledge of the Quebec music scene. Nor of the other French-speaking communities in Canada.

chumawumba
It's not location based. Just use a US Apple ID and you are set.
Score: 2 Votes (Like | Disagree)

Do you still feel it's dead given it's inclusion in the updated 8.4 music app?


Yes, living in the UK and having not seen even a little attempt from Apple I call it dead, Ping was a huge success by comparison.
Score: 1 Votes (Like | Disagree)

It's not location based. Just use a US Apple ID and you are set.


But it's hassle for some users who have Credits or Credit Card. Who wants to change their ID when they want to purchase songs/apps and when they want listen to iTunes Radio? Or maybe people who don't want to create another account just to listen on iTunes Radio.
Score: 1 Votes (Like | Disagree)

MattInOz
Yeah right like the Australian right holders are going to agree to that any time in the next 5 years.
Score: 1 Votes (Like | Disagree)
Read All Comments

Sunday May 16, 2021 2:39 pm PDT by Eric Slivka
The Browse tab in the Music app across Apple's platforms has started displaying a prominent teaser hinting at an upcoming major announcement for Apple Music. Under the heading "Coming soon," the headline says "Get ready – music is about to change forever." An accompanying "Tune-In Video" simply shows an animated Apple Music logo. Rumors have indicated that Apple is preparing to launch a...
Read Full Article • 99 comments