Following a discussion about the duo's design vision and obsession with perfection in a Vanity Fair article last month, Apple's senior vice president of design Jonathan Ive and industrial designer Marc Newson appeared on the Charlie Rose show last night, with airings of the interview occurring last night on PBS and again tonight on Bloomberg TV. 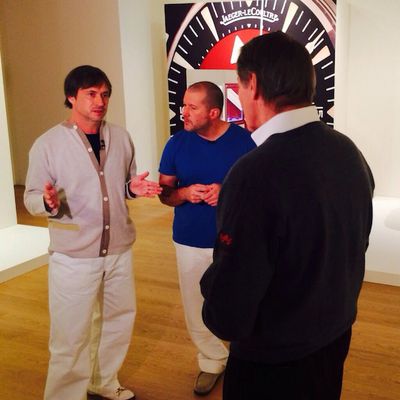 Left to right: Marc Newson, Jony Ive, and Charlie Rose (Source: @charlierose)
Ive and Newson have collaborated numerous times throughout the past few months to select and customize products for Sotheby's charity auction to benefit Product (RED), including a one-of-a-kind Leica camera, an aluminum desk, solid gold Apple EarPods, and a one-of-a-kind red Mac Pro. Product (RED) has been a longtime Apple partner, with the company raising more than $65 million for the charity since 2006. The two had previously appeared in a video discussing the auction and their role in it.
(Note: Video contains one use of profanity near the end)
Update: The full video of the duo's interview on the show has been posted above.
Tag: Marc Newson
[ 70 comments ]

NachoGrande
sorry iOS 7 is not perfection.
Score: 16 Votes (Like | Disagree)

0815
Ive is a fantastic designer - at least for hardware and (industrial) objects. Almost every object he designs, I love .... but that does not seem to translate well into software/UX design - I'm still very disappointed in the iOS UX.
Score: 12 Votes (Like | Disagree)

AngerDanger
I'm getting a bit Iverwhelmed by all this.
Score: 8 Votes (Like | Disagree)

gugy
Jony needs to design some shaving blades to Gillette and use on him. The guy always look like he just got out of his bed.
Score: 7 Votes (Like | Disagree)

So...it looks "very well" or it's only his first crack at it and it needs improvement. It can't be both.

iOS 7 is a step backward. It wasn't just simplified. The usability was altered.

iOS 7 is literally a rare piece of art compared to iOS 6. When I look at iOS 6 after having used iOS 7 I am amazed at how truly awful iOS 6 looked. Just to point out one thing that was particularly embarrassing about iOS 6: the menu bar colors, dear god that was awful, and it completely distracted from the ability to read anything in the menu bar because it was all the same color except very minute fading of the same color to display the menu bar icons and time. It was an abomination as soon as I saw it I was disgusted.
Score: 6 Votes (Like | Disagree)
Read All Comments