Apple Continues Work on Liquidmetal Alloys for Use in Future Products 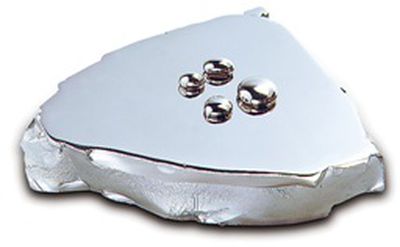 Apple is investigating the use of Liquidmetal alloys to create various product parts using injection molding and 3D printing, according to five patent applications the company filed with the U.S. Patent and Trademark Office in 2012. (via Patently Apple).

Apple has been rumored to be experimenting with amorphous metal alloys, aka Liquidmetal, ever since the company signed an exclusive deal with California-based company Liquidmetal Technologies back in 2010. Liquidmetal alloys demonstrate a different molecular structure than traditional metals, which results in a stronger, harder substance that is also durable, thin, and moldable into unique shapes.

The patents are highly technical and describe methods of creating parts layer by layer using bulk metallic glasses, aka Liquidmetal alloys, as is done with 3D printing, which Apple suggests is quicker and less expensive than traditional machining of parts. According to the patent, 3D printing could be especially useful for visualization, demonstration, and mechanical prototyping, as well as the production of patterns for molds.

Apple's patents indicate that Liquidmetal alloys could be used within iPhones, iPads, iPods, and as part of a digital display or computer monitor. Apple also specifies potential uses in the Apple TV, remote controls, hard drive tower housings, laptop houses, keyboards, track pads, mouses, speakers, and a "device such as a watch or a clock."

Rumors have long suggested that Apple could use Liquidmetal in its device casings, allowing the company to create slimmer products that are highly resistant to wear. The former director of research at Liquidmetal Technologies claimed that Apple would eventually "make the iPhone out of it."

Apple has, however, recently been awarded a patent on the mass production of amorphous metals, indicating that the company is continuing to make progress with the material.


I knew this thread would already be populated by Terminator references. I am not disappointed. :D
Score: 10 Votes (Like | Disagree)

Macrumors really getting some mileage out of that picture for liquid metal articles.

Crazy, an iPhone you can drink!?


You could do that now if Apple made the iPhone out of mercury.

Meandmunch
Liquid metal iPhones is the new Apple Unicorn. Talk, talk, talk… When my iPhone can shrink and grow and change shape at my command then i will believe it.
Score: 4 Votes (Like | Disagree)
Read All Comments