In a lengthy piece detailing the hardships that workers in Apple's supply chain can face, Bloomberg follows the story of a factory worker at Flextronics International, a contract manufacturer based in Singapore and Kuala Lumpur that produced camera parts for the iPhone 5.

Ahead of the launch of the iPhone 5, Flextronics had to significantly ramp up production, hiring a 1,500 new employees via brokers and recruiters in Nepal, Malaysia, and surrounding areas. Because factory jobs are highly desired, many families pay upfront fees to brokers to acquire the positions, resulting in loans that can take "imported" workers years to pay off, with factory managers controlling when workers are able to leave. 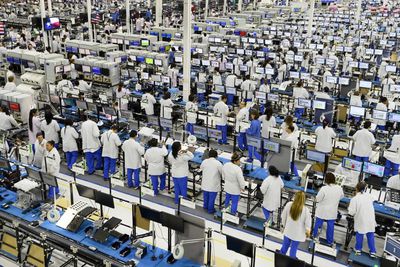 Inside a Flextronics factory in Fort Worth, Texas. Courtesy of The Wall Street Journal

For the iPhone 5 rollout, a recruiter working for Flextronics contacted four brokers in Kathmandu, Nepal's capital, in late August and early September, urgently seeking 1,500 men to make cameras, according to three of the four brokers. The pressure to move so many men so quickly was unprecedented. "The recruitment agency was telling me, 'We need these workers, you have to send them by today,'" says Rajan Shrestha, managing director of a small company called Sharp Human Resources.

The frenzy to hire workers was how one Nepalese man, Bibek Dhong, found himself paying $250 and handing over his passport to a recruiter who promised him a good job. Dhong was forced to pay another $500 to a broker (6 months of his wages from his former job as a dairy farmer) and sign a debt agreement stating he would pay $400 more. Dhong was told to keep his broker fees secret, as Apple has a policy that prevents excessive charges by recruiters.


Last year [Apple's] audits turned up $6.4 million in fees paid by workers beyond the company's prescribed limit—compared with $6.7 million in the previous four years combined. And Apple audited fewer plants last year than it did in 2011. The company orders its suppliers to refund workers charged beyond its limit.

The Flextronics plant where Dhong was inspecting cameras experienced high failure rates before slowing and shutting down production. Because Flextronics retained Dhong's visa, he was unable to leave, stuck in a hostel in Malaysia with no food. After two months, he was permitted to return home, where he had to sell off much of his land to pay his debts and take a low paying job to continue to pay off the rest of the money for the factory job he didn't get to keep.

According to an Apple spokesman, Apple aggressively investigates claims of bonded labor where Apple products are made, and has mandated reimbursement to employees charged excessive recruitment fees.

"We aggressively investigate any claims of bonded labor where Apple products are made, and our team is continuously auditing deeper into the supply chain. We recently updated our code of conduct to require our suppliers to directly interview workers who are hired through labor brokers, as another way of eliminating unethical practices. Although Flextronics's Bukit Raja facility is no longer in Apple's supply chain, we take these allegations extremely seriously."

Apple has frequently been in the spotlight over the conditions at the factories where its products are made and the company has low tolerance for factories that violate its rules. For example, in January, Apple dropped one supplier for using underage workers. It is, however, an ongoing battle for Apple, as many factories are aiming to produce high volumes of products at low costs, often defying labor rules to keep profits high.

Flextronics remains an Apple partner, and will run an Austin plant that will be responsible for the production of Apple's upcoming Mac Pro.

Chupa Chupa
Funny how all these labor violation stories always single out Apple even though the facilities produce products for other top end electronics companies. Then there are companies that produce in other facilities and never called out. And finally, all these facilities are in countries that are U.N. members and supposedly pledged to the U.N's Universal Declaration of Human Rights, yet its condemnation is as loud as a sugar ant. Makes you think it's more about trying to knock Apple down than actually help abused workers.
Score: 19 Votes (Like | Disagree)

It's all Apple's fault. HP, Samsung, Acer, Moto, etc., etc., all use air conditioned plants in the US where emplyees work from the comfort of a Lazy Boy reclinder for $60 an hour working just three 7 hour days a week but get paid for 40 hours.
Score: 17 Votes (Like | Disagree)

likemyorbs
Good. For what I pay for my products they damn well better be made with sweat shop labor and children's tears.
Score: 13 Votes (Like | Disagree)

Funny how all these labor violation stories always single out Apple even though the facilities produce products for other top end electronics companies. Then there are companies that produce in other facilities and never called out. And finally, all these facilities are in countries that are U.N. members and supposedly pledged to the U.N's Universal Declaration of Human Rights, yet its condemnation is as loud as a sugar ant. Makes you think it's more about trying to knock Apple down than actually help abused workers.

how does tim sleep at night ? besides on his million dollar bed sheets


How about all the people who complain about this yet continue to purchase Apple products. Put your money where your mouth is if it bothers you so.
Score: 10 Votes (Like | Disagree)

It's all Apple's fault.


As the industry leader, which they happily celebrate, they should be setting an example for everyone else. Not to mention their CEO is happy to support liberal ideas and individuals when it suits him.
Score: 10 Votes (Like | Disagree)
Read All Comments

Tuesday January 24, 2023 1:11 pm PST by Joe Rossignol
While the new Mac mini with the M2 chip has a lower $599 starting price, the base model with 256GB of storage has slower SSD read and write speeds compared to the previous-generation model with the M1 chip and 256GB of storage. A teardown of the new Mac mini shared by YouTube channel Brandon Geekabit reveals that the 256GB model is equipped with only a single 256GB storage chip, while the...
Read Full Article • 537 comments