Both LG and Samsung plan to release phones that feature curved displays in the near future, reports Reuters. Flexible curved displays, which have been utilized in television sets, are a developing technology for smartphones and other consumer electronic devices.

Curved displays are in the early stages of development and allow bendable or foldable designs that could eventually allow mobile and wearable gadgets to take new forms that could radically change the high-end smartphone market.

Apple has been rumored to be working on curved displays for several years, with rumors from 2011 suggesting the company could debut a curved glass iPhone. A patent for such a device was published in March of this year, depicting a phone with a wraparound body. 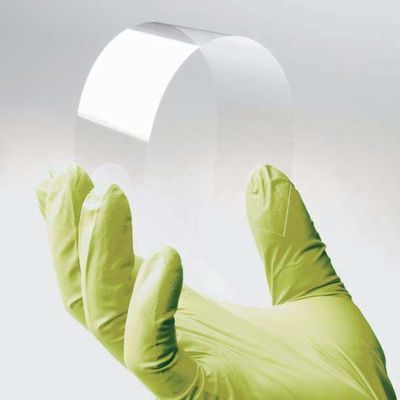 Corning's Willow Glass
More recently, it has been suggested that the company's rumored iWatch could incorporate a curved glass display, using bendable Willow Glass. While Gorilla Glass has claimed that the technology is not yet ready for consumer devices, a plastic-based flexible display similar to the one used by LG and Samsung is readily available.

The debut of LG and Samsung's initial curved display products will provide a glimpse of what the future could hold for upcoming smartphones and other electronic devices, including the iWatch.

LG's smartphone is said to utilize a 6-inch display that curves from top to bottom, while Samsung's will curve from side to side. Both displays are built on a plastic substrate that allows them to bend and flex, and according to LG, its display will be among the world's thinnest mobile panels.

While the phones incorporate displays that bend, it is unclear whether the finished smartphones themselves will be flexible or rigid, similar to the impliable designs used in television sets from both companies.

Samsung's smartphone will launch in October, while LG's will come slightly later, in November. Apple's iWatch is not expected to debut before late 2014.

kunai
This is hilarious, because when flatscreen LCDs came out, everyone breathed a sigh of relief because they wouldn't have to deal with the curved screens of CRT monitors that distorted shapes and couldn't be hung on a wall.

Change for the sake of change is not progress. Change is easy... improvement is much harder.
Score: 23 Votes (Like | Disagree)

Harrycooke
I don't get the hype over curved displays. They seem rather novelty. I couldn't see myself using one.
Score: 22 Votes (Like | Disagree)

This is a technology that will be useful, but like 64-bit is more forward-looking. Once displays truly become flexible then they will be more useful. For now, curvature might help reduce glare. Anyway, we should probably wait to see what LG and Samsung actually produce before passing further judgment. The fact that both of them are in the game means that Apple has options if it wants to incorporate any similar designs next year or in the future.

Potentially it could reduce glare if it is concave. Also, it could be a way of reducing the bezel size or increasing the usable area of a screen without increasing the physical size.


Curvature won't reduce glare, it will increase glare. You might be too young to remember, but one of the benefits of going with flat screens was to reduce glare in monitors.
Score: 17 Votes (Like | Disagree)

roadbloc
What would the benefit be of having my display curved?
Score: 12 Votes (Like | Disagree)

Mine bends to the left.

This is the epitome of targeted advertising: