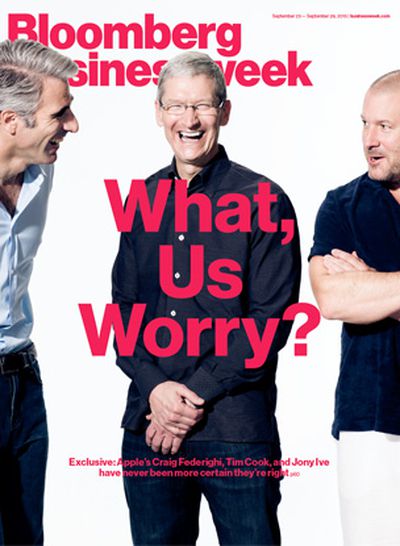 Following last week's cover story on Apple CEO Tim Cook, SVP of Design Jony Ive, and SVP of Software Engineering Craig Federighi, Bloomberg Businessweek has published the full transcript of its interview with Ive and Federighi, which reveals even more about Apple’s leading trio and the work that went into Apple’s newest mobile operating system, iOS 7.

According to Federighi, both he and Ive "wanted to do something big," and had to figure out how to bring together various Apple teams that had not previously worked together. After a major management restructuring last fall, Jony Ive took over Human Interface in addition to Industrial Design and Craig Federighi, who was previously in charge of OS X, took over iOS as well.

ID [Industrial Design] and HI [Human Interface] weren’t working together as much, and that became an intense collaboration, along with Engineering. These are teams that had a creative relationship going back a long time, but this became now a very intense relationship in the construction of iOS 7.

The mission, said Federighi, became "so clear and so critical" that "everyone who needed to contribute jumped in." Ive agreed, adding that intense task of creating iOS 7 gave their teams an "all-consuming focus" that greatly enhanced collaboration.

I think that when you have a focus that’s that clear, what could be barriers sort of real or virtual would—in effect, just [waves hands in a dissipating gesture]. And it’s not even a conspicuous fading away—it’s just you’re so consumed by sort of trying to do something as well as you possibly can and enjoying the broad collaboration.

In addition to a close collaboration between their teams, Ive and Federighi have worked hand-in-hand on iOS 7. The two sit within one minute of each other, with Ive describing their working relationship as "very fluid."

At the end of the day, when you have been part of a team, getting to work with engineers working at that level or then can work with engineers who have been working on the gyro test, but we’re all trying to sort of deal with the same problem. The fact that we’re all united, that we are genuinely focused on trying to solve the same problem, I think those are the days that you go home feeling what a privilege it is to work at Apple.

Ive and Federighi also described what it's like working for CEO Tim Cook. According to Ive, Cook is "incredibly supportive and understanding" of the problems Apple faces designing new products, and "he encourages the sort of collaboration and teamwork necessary to solve those problems." Federighi agreed, calling him a "beacon for Apple's values."

I think Tim understands intuitively how what we do here is the product of so many disciplines working so closely together. And he does everything he can to foster that happening to create great products.

The full interview, which spans multiple pages, goes into further detail about the deep collaboration between the various teams at Apple and highlights the thought processes behind the development of Apple software.

Both Jony Ive and Craig Federighi were also interviewed by USA Today last week, further discussing their partnership and the development of iOS 7.

Seoras
I remember back in the day...

...before the iPhone was launched but it was obvious Apple was going to bring out an phone. 2006/2007
I saw some posts on here and a couple of mock ups of what an "Apple Phone" would look like.
It was white and it looked like a Ive wannabe designed Nokia or Motorola Razor.
Nothing new really.
So when I see posts bemoaning the lack of TV, Watch, etc I shake my head as I remember how wrong we all were and how right Apple got it.
So stop being smart asses like you know better,you dont...
Be patient & wait and see...
Score: 23 Votes (Like | Disagree)

The heir-apparent to Steve is Jony Ive. He's the man everyone should be looking at to truly shoulder the ingenuity of the post-Steve Apple. Too many put all of the apples in the Tim Cook basket (and some for good reason). I for one, don't.


I think Steve Jobs skewed the concept of what a CEO is versus what he did. He was able to pull it off due to his charisma and penchant for presenting new products, but a true CEO is in fact Tim Cook, with creatives underneath him. Not vice versa like how it was with Jobs.
Score: 21 Votes (Like | Disagree)

Hopefully in the bin under his desk.


No need to bring the new Mac Pro into everything. ;)
Score: 18 Votes (Like | Disagree)

Ive is the man. Flat.

Ive sucks. Flat is dumb. Buttons should stand out from the background, not be indistinguishable. And for ****s sake, some consistency, man! Gradient up, gradient down, what does the photo icon represent anyway, why are there bubbles on the game center icon, and why are those bubbles 3D instead of flat, why are all the colors playskool bright, why is find my friends still skeumorphic, why are some apps black-on-white and some white-on-black, etc, etc, etc. Ive is supposed to be the man, but c'mon, a lot of this is basic design and it's amazing he got it wrong.
Score: 17 Votes (Like | Disagree)

This year MR posters: "Omg we want iOS 6 back".