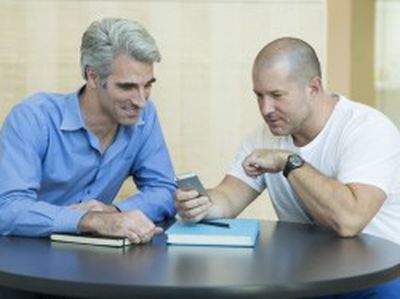 While Apple design guru Jony Ive and software engineering chief Craig Federighi were included in a Bloomberg Businessweek cover story published today, much of the focus of that piece was on CEO Tim Cook and his thoughts about Apple and the competition.

Ive and Federighi now get some attention for themselves in an interview with USA Today in which the two discuss their partnership that led to the development of iOS 7.

"When we sat down last November (to work on iOS 7), we understood that people had already become comfortable with touching glass, they didn't need physical buttons, they understood the benefits," says Ive. "So there was an incredible liberty in not having to reference the physical world so literally. We were trying to create an environment that was less specific. It got design out of the way."

Federighi goes on to note that the technological advances over the past few years have finally reached the point where Apple is able to tackle something like iOS 7.

"This is the first post-Retina (Display) UI (user interface), with amazing graphics processing thanks to tremendous GPU (graphics processing unit) power growth, so we had a different set of tools to bring to bear on the problem as compared to seven years ago (when the iPhone first launched)," he says. "Before, the shadowing effect we used was a great way to distract from the limitations of the display. But with a display that's this precise, there's nowhere to hide. So we wanted a clear typography."

Ive jumps in. "Yes, we wanted to defer to the content, and just get out of the way."

The piece also includes a bit of a biography on Ive, discussing how he came to join Apple and the freedom and power he holds at the company. It also reflects on his focus on simplicity, with Ive pointing to the new Touch ID fingerprint scanning system on the iPhone 5s as an example of a feature that is useful but almost invisible in how it functions.

Teasing future products from Apple, Ive notes that he would "love, love, love" to reveal what he and his design team have been working on, but that he would lose his job if he did.

Finally, Ive addresses the topic of competition, noting that his work is driven by Apple's own tastes and those of its customers. He says that he keeps a close eye on what competitors are doing with their designs, but that their work does not influence his designs "at all".

ThunderSkunk
Well I look forward to seeing this UI completed.

Mobile Safari's toolbar looks like a 3 year old drew it with a pencil.
Score: 17 Votes (Like | Disagree)

Treq
A design that's less specific!? Really? I'd rather know specifically where the button is. I'd rather have borders to differentiate between elements. I just don't like "Flat" I guess.
Score: 13 Votes (Like | Disagree)

psingh01
Funny how they've spent all summer talking about how bad skeumorphism is. When I first saw the iOS 7 preview the first thing that came to my mind was if it's so bad why did they add etched glass looking panels all over iOS 7? I don't think it is an improvement over what we already had, just different and in some cases worse because it is harder to see.
Score: 12 Votes (Like | Disagree)

FSMBP
Craig is solely responsible for my renewed faith in Apple. The direction iOS 7/Mavericks has gone is both targeted towards simplicity AND giving more features to "power-users".

Even the little things that changed in iOS 7, like new ringtones/sounds & wallpapers, seem like they would have never changed much under older management.
Score: 12 Votes (Like | Disagree)

Rubbing it in Forstall's face :D


Actually, I think they're pointing to the fact that Forstall's work was needed. It was necessary in the beginning. Now however, it isn't as much. It's possible Forstall couldn't adapt to a new vision for the interface, or that he simply couldn't work with the current management. Either way, I don't think it's meant as a slight against Forstall at all.
Score: 9 Votes (Like | Disagree)
Read All Comments