Monday September 23, 2013 6:18 am PDT by Richard Padilla
Apple retail stores have now begun offering a Personal Pickup option for the iPhone 5s through its online purchase page, allowing customers to see store availability for each model and place orders for in-store pickup.

The move comes after Apple quickly sold out of its initial iPhone 5s online order stock following its launch on Friday, with shipping estimates in the United States falling to October.

In-store pickup is also available for the iPhone 5c, although that device has seen much better availability than the iPhone 5s. 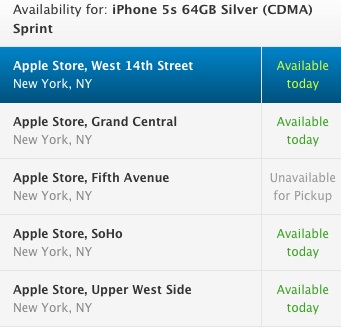 Apple cited "incredible" demand for the new iPhones in the hours after the launch, acknowledging shortages of iPhone 5s models. Gold models in particular have been more popular than Apple predicted, with the company reportedly boosting production of those models by one-third.

The iPhone 5s was announced alongside the lower-cost iPhone 5c at a media event last month, and includes features such as the new “Touch ID” fingerprint sensor, a 64-bit A7 chip, and a new iSight camera with a dual-LED “True Tone” flash.

Update: As noted by 9to5Mac, the ability to place orders for in-store pickup and check store availability is also available in the Apple Store iOS app.

mbarriault
I'm failing to understand why they're restocking stores at all when launch day online orders (more accurate: launch minute orders) still show 7-10 day wait times. Shouldn't those who already bought one, let alone those who got up in the middle of the night to do so, have some level of priority?
Rating: 5 Votes

boshii
They should start doing this from day 1.
Rating: 4 Votes

Gutwrench
Having in-store pick up available one day and mysteriously unavailable next is a bit annoying.

A large part of Apple products are for communication.
Communicate Apple.
Rating: 2 Votes

Nothing in Chicago stores. However, my 32GB space grey shipped from ZhengZhou and will arrive Wednesday :)

Can you mention which sites those are? I can't find any info on how people are actually finding 5s phones to buy. I've been turned away from my local store 3 times now and they just tell me to come back the next day. :(

Hopefully it will just be a few more days before supplies are more plentiful in store. FWIW, my sister ordered at 12:01 PDT on Friday and should get the phone tomorrow. Over the weekend I was pleasantly surprised to see phones in stores (albeit limited configurations), but I'm in a big city (Chicago).
Rating: 1 Votes

i remember that during the last evening, we received orders to announce to the queue that we were out of stock


Your screenshot is much more representative of reality than the one provided with the article. None of the stores in my area also show any availability at all, at least right now.
Rating: 1 Votes

They should start doing this from day 1.


Agreed - Apple needs to realize that hype cometh before the fall. It was quality that made you Apple.
Rating: 1 Votes