Apple appears to have sold out of its iPhone 5s stock, with shipping estimates for all models in the United States slipping from 7–10 days to an ambiguous "October" ship date. The phone, which went on sale yesterday, saw shipping times of 1–3 days for the first four hours that it was available before estimates dropped to a seven to 10 day ship time. 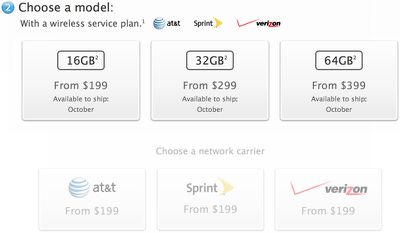 Shipping estimates for online orders of the phone opened at 7–10 days in a number of countries, indicating significant stock shortages. Apple saw high demand for its gold iPhone 5s, which sold out within 28 minutes after launch in the United States. Both gold and silver iPhones were available in very limited quantities from Apple and other third-party retailers, while stock of the space gray phone appeared to be more widely available.

According to an Apple representative, the company saw incredible demand for the new phone, and a report from The Wall Street Journal suggests Apple has already asked its supply chain to increase production of the gold iPhone 5s in particular.

Currently, all colors and capacities of the iPhone 5s from all U.S. carriers display a shipping estimate of October. The same is true for the rest of the world, with online Apple Stores in Australia, Canada, China, France, Germany, Japan, Singapore, and the U.K. displaying identical October estimates.

iPhone 5c supplies remain plentiful, with all colors and capacities available to ship within 24 hours.

I really think Apple just screwed this thing up by releasing the 5C. They focused on a lower level tier instead of their top tier, which as we can see now, is severely constrained.

Are you kidding me??

This makes the increased cost of the 5S over the 5C seem more worth it.


this is why manufactures of all kinds of things ( car's motorcycles artwork .. so on and so on) have limited special editions.

Apple does this every year. They create artificial demand to have people talking about
The phone and make the news. The stores only have space grey, as if that was an accident. They know they sell the least so supply those first to sell to people out of impulse and being impatient.

Some stores only have 10-20 gold iPhones? A billion dollar company can't make enough supply? Give me a break.
It's getting old, just make enough of what people want.

Go google chip yield and silicon fabrication. Name any other company that needs to meet the demand of cutting edge first production chip technology in the amounts apple's iPhone debut weekend demands! Study in your business class product deadlines and how important release dates are. Apple doesn't have the resources at this time to fabricate their own chips. They depend on other companies such as samsung to produce their chips.
If you understood the business you would understand how small the window has to be to stay competitive in this business . Do you realize it can take up to 8 weeks to fabricate a chip!!! Imagine how difficult it is to bring a product such as the iphone to market. Not only do you have to time chip production with manufacturing time tables. You also have software deadlines. My guess is Apple is running on unbelievable demanding time deadlines. Just look at when iOS 7 made its debut as a developer preview and how quick it is actually released. My guess is if Apple were to wait until they had enough stock to meet demand through out the world they would sacrifice a significant amount of sales to other manufactures as people tend to be very impatient. Just look at these boards as proof.

I could also tell you as a business customer who deals directly with Apple, their goal is to get as much
product into customers hands as fast as possible. Your statement that Apple Artificially inflates demand couldn't be farther from the truth!! Just google "demand Apple puts on its suppliers" They are brutal in trying to secure as much product as possible such as DRAM etc.

You want more proof your completely wrong? Go research the number of iPhones sold on launch weekend since its debut. It is exponentially increasing. Very simple Apple is increasing the number of phones every year trying to meet demand. If they were really trying to limit demand wouldn't they be releasing the same amount or fewer units? It couldn't be any more obvious; every year the demand is increasing and Apple and its manufacturing partners can not keep up with initial demand. If you also look at Asymco site they analyze the amount Apple spends on increasing manufacturing capabilities. IN the last few years the amount has been doubling. This is because they actually buy the equipment that companies such as Foxconn use to manufacture the iPhone
Score: 13 Votes (Like | Disagree)

Nyy8
I guess I should be thanking the lord I walked into an Apple Store at 5pm launch day, and they had the exact color, and exact size I wanted. :eek:
Score: 12 Votes (Like | Disagree)

The 5C is definitely a failure.

The 5S fate has yet to be determined. You can't give a store 3 5S Golds and they sell out and call it a success....

I thought Cook was a Logistics guy--what is he now trying to be Jobs--the sales guy?

If these were made in the USA this wouldn't have happened.


Evidence that the 5C is a failure?

People are so ignorant. Coworker who purchased a 5s talked with the Apple store employees in the line he was waiting in, they indicated they were selling tons of 5C's along with the 5S. The 5C being in stock does not mean it isn't a success.

Apple has played this release nearly perfectly. The margins they must be making on the 5C......
Score: 11 Votes (Like | Disagree)

jav6454
I really think Apple just screwed this thing up by releasing the 5C. They focused on a lower level tier instead of their top tier, which as we can see now, is severely constrained.
Score: 11 Votes (Like | Disagree)
Read All Comments