Apple appears to have removed iCloud Keychain support from the iOS 7 Golden Master (GM), which was seeded to developers yesterday. While iCloud preferences previously listed iCloud Keychain, the option has now been removed, suggesting that the initial public release of iOS 7 will not include the function. 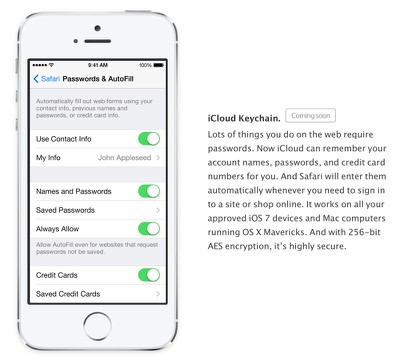 iCloud Keychain is also newly tagged as "Coming soon" on Apple's iOS 7 feature page and while it is unclear why it has been removed from the GM, it is likely that Apple has chosen to provide the feature alongside OS X Mavericks, which is slated to be released later this year.

While Mavericks will not be available until later in the fall, iOS 7 will be released to the public on September 18, ahead of the release of both the iPhone 5s and the iPhone 5c.

Lord Hamsa
If it isn't ready for primetime, then it isn't ready. For something as significant as passwords, I'd rather they get it right the first time than rush out something to make a deadline.
Score: 45 Votes (Like | Disagree)

GreyOS
They need more time to put the NSA backdoor in.
Score: 35 Votes (Like | Disagree)

orbital~debris
Glad it's still 'coming soon' and not cancelled!
Score: 20 Votes (Like | Disagree)

maverick808
It kind of makes no sense without Mavericks. I think it'll appear via a minor update on the day Mavericks is publicly released.
Score: 16 Votes (Like | Disagree)


What are you doing Saturday?
Score: 12 Votes (Like | Disagree)

The fingerprint thing would seem to make this walking obsolete.


You can't login to Netflix, your bank, or any of a million other places with your fingerprint at the moment, so no, it won't.
Score: 8 Votes (Like | Disagree)
Read All Comments