A Chinese regulatory body has given Apple the final license necessary for the iPhone to run on China Mobile’s wireless standard, reports The Wall Street Journal. The approval comes after Apple’s announcement yesterday of the new iPhone 5s and lower-cost iPhone 5c, both of which support the TD-LTE standard used by China Mobile, the world’s biggest carrier with over 700 million users. 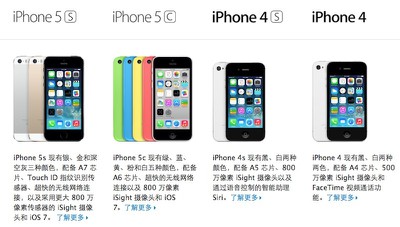 According to the website of China's Telecom Equipment Certification Center Wednesday, Apple received what's called a "network access license" for a handset resembling the iPhone that runs on the mobile standards used by China Mobile for third and fourth generation cellular services. Other licenses were given to Apple for handsets running the technology used by both China Unicom (Hong Kong) Ltd. and China Telecom Corp.

A deal between China Mobile and Apple has reportedly long been in the works, with China Mobile Chairman Xi Guohua and Apple CEO Tim Cook meeting in July to discuss “matters of cooperation”, with the former indicating that he felt optimistic about a potential deal leading up to the announcement of the new phones. Last week, The Wall Street Journal also reported that Apple was preparing to ship the new lower-cost iPhone 5c to the carrier, suggesting a deal between the two companies had indeed been reached.

The new iPhone 5s and the lower-cost iPhone 5c will be available in stores in China, the US, Australia, Canada, France, Germany, Japan, Singapore, and the UK starting on September 20.

absurdamerica
How can you guys even be serious? The 5C isn't priced any differently than the previous options. It may cost less to build, but that's about it.
Score: 10 Votes (Like | Disagree)

jmerchlinsky
The iPhone 5C is a "low cost" phone, it's just not a "low price" phone.

Here's the dynamic... the feature differences from year to year are beoming less dramatic. So less US customers are opting for the $200 premium phone and more are opting for $100 yr old phone or the free 2-yr old phone. Here's the dirty little secret. The manufacturing cost of all of Apple's phones (up to now) are about the same. It costs Apple just as much to make a 4S as it does a 5S. So Apple's margins are getting whacked by the shift to the older phones. Apple's response is to decontent the older phones to improve those margins. Give the customer less for the same price.

So the 5C is all about improving margins. What the 5C is most resoundingly NOT, is a low price phone targetted towards emerging markets. Apple continues to neglect that segment. Cook has had a clear strategic decision to make, margins or market share, and he's made it.
Score: 5 Votes (Like | Disagree)

A deal with China Mobile has not been announced, yet, despite all the hype about it. The market is disappointed.

Because the market knows that a China Mobile deal isn't going to help much when you price the 5C at 4488 yuan ($733).

UBS cited a survey of 35,000 Chinese consumers conducted by ChinaDaily.com that indicated only 2.6 percent of respondents would consider buying the cheaper iPhone at the $549 level. With a price point nearly $200 more, don't expect the 5C to be a hit there.
Score: 4 Votes (Like | Disagree)

I believe 5C is purely targeted for China


Why do people keep saying that? It's complete nonsense. It's targeted at anyone and everyone who simply want a cheaper iPhone. It's going to be on sale worldwide.
Score: 4 Votes (Like | Disagree)
Read All Comments