After years of ongoing negotiations, it appears that Apple and China Mobile have finally reached a deal that will see China's largest carrier offer the iPhone. According to The Wall Street Journal, Apple is currently preparing to ship the new low-cost iPhone "5C" to the carrier.

Apple has asked Foxconn, its longtime contract manufacturing partner, to add China Mobile to the list of carriers slated to receive a new low-cost iPhone, one of these people said. It isn't clear when the phones would be delivered.

Reaching a deal with China Mobile has not been an easy feat for Apple, and the two companies have been in negotiations and talks for more than two years. 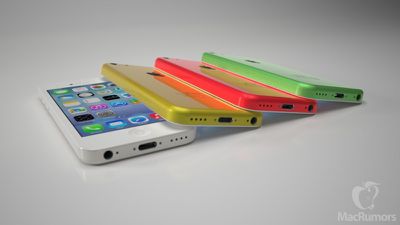 Rendering of Apple's Low-Cost iPhone 5C
Much of the problem stemmed from China Mobile's use of TD-SCDMA, which Apple's iPhones have not previously supported, though revenue share terms were also an issue. Tim Cook met with China Mobile officials several times over the course of the year and in August, China Mobile chairman Xi Guohua reported that the company was close to achieving an agreement with Apple.

Apple's lower-cost iPhone, which has been developed primarily for emerging markets like China, is expected to carry a price tag between $400 to $500, making it more affordable than alternatives like the upcoming flagship iPhone 5S. Apple will announce its new iPhone lineup on September 10, with an event to follow in Beijing on September 11.

While China Unicom and China Telecom are expected to receive the iPhone on September 20, China Mobile's launch could come somewhat later because of the need for regulatory approval on the TD-SCDMA compatible iPhone.

Update: According to Bloomberg, a deal is close to being finalized, but it will not be announced during the September 10 iPhone event.

Ryth
...and one of the last strongholds/strangleholds of Android is about to fall.

Folks...the marketshare % is about to take a drastic swing worldwide.

It already had shifted in the US when T-Mobile finally got the iPhone 5 in the spring leaving Android in the USA no place to hide.

With the iPhone appearing on more and more carriers where Android has had exclusivity is going to bring their % tumbling down.

Can't wait for the analysts to try to spin this one.
Score: 21 Votes (Like | Disagree)

Oh get off it already. It would be a great disservice to us if the market became >90% iPhone.

Why do you assume they will choose an iPhone by default? They are probably more than happy with how open Android is, so while I am sure iPhone sales will pick up I doubt this is the Android crusher you believe it will be.


Because the same assumptions have been made everywhere and everywhere the iPhone appears, it takes the majority of % of share.

They said the same thing about T-Mobile. iPhone has been out for a while and T-Mobile is more Android type people. And low and behold, iPhone takes the #1 sales slot from them also. People want the iPhone and with the new 5c, it's even more reasons for the mid range/low to possibly buy it.

...and one of the last strongholds/strangleholds of Android is about to fall. Folks...the marketshare % is about to take a drastic swing worldwide. It already has shifted in the US when T-Mobile finally got it and Android no longer had a place to hide.

Oh get off it already. It would be a great disservice to us if the market became >90% iPhone.
Score: 7 Votes (Like | Disagree)

Aussi3
Apple shares are going to go up massively when this happens
Score: 6 Votes (Like | Disagree)

GuitarDTO
We get it. China Mobile is getting the iPhone. Yay.