A new video gives a detailed look at of Apple's upcoming "champagne" iPhone 5S along with a close look at the blue low-cost iPhone "5C". The video, posted by AppAdvice, compares the backplates of both devices to the existing iPhone 5 and gives the clearest look yet at the design of Apple's newest iPhones.


As noted in multiple descriptions of the "gold" iPhone, the color is closer to a light champagne than it is to a bright and garish gold. The video depicts a subdued gold color that matches well with the silver of the existing iPhone 5.

The iPhone 5C and 5S backplates in the video appear to be similar in size to the existing iPhone 5. While the low-cost iPhone is slightly thicker due to its polycarbonate shell, the iPhone 5S is nearly identical to the iPhone 5 with the exception of the dual-LED rear flash. The iPhone 5S, which will be Apple's new flagship device, is also expected to feature a redesigned home button to incorporate its fingerprint sensor.

Though the iPhone 5S will feature improvements to the processor along with camera upgrades and other enhancements, the iPhone 5C will likely utilize existing iPhone 5 parts as it is rumored to be a replacement for the iPhone 5.

The iPhone 5C is shown in blue, but it will come in an array of colors including blue, green, red, yellow, and white. Apple is not expected to produce a black iPhone 5C, but all of the 5Cs will feature standard black faceplates with a matching black Apple logo on the back of the device. 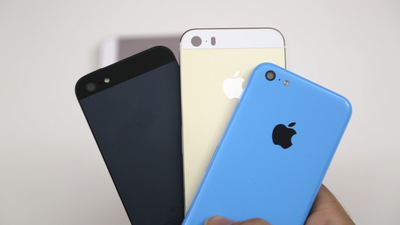 As noted by AppAdvice the iPhone 5S features a shiny metallic logo along with thinner "iPhone" text, which appears to be inline with both the lettering on the iPhone 5C and Apple's overall adoption of skinnier fonts.

Earlier today a rumor surfaced suggesting that Apple could have a “graphite” colored iPhone 5S in the works, which would accompany the champagne/white, silver/white, and slate/black iPhone 5S varieties.

Both the iPhone 5S and the iPhone 5C are expected to debut at an iPhone event held in September.

Rogifan
At what point does this stop being news as every leak is basically showing the same thing the previous leak showed?
Score: 12 Votes (Like | Disagree)

Am I the only one the champagne colour is starting to grow on me? Looks great in that vid.


That was kind of inevitable.

When rumors of a "gold iPhone" appeared, some people whose mentality I can't quite understand claimed that (a) Apple would produce a phone in the most nasty gold colour imaginable, and (b) Apple would stop all other product development and the colour would be the only change. They then took the opportunity to shoot off a barrage of infantile, often insulting, often racist, always intolerant posts that failed miserably to proof that these people had any idea of taste, style and beauty.

Should have been obvious from the start that Apple would choose colours that actually appeal to a large part of their potential audience.
Score: 9 Votes (Like | Disagree)

WOW! this is the best set of leaks i've seen on any Apple product!

Anybody notice the Champagne one isn't real ?


It's a shell
Score: 8 Votes (Like | Disagree)
Read All Comments