In what has become something of a tradition ahead of Apple's product launches, Digitimes is reporting that the iPhone 5S may see constrained supplies at launch due to poor yields of certain components. In this case, the issues are said to be related to chips supporting fingerprint recognition and the device's LCD, according to industry sources.

The fingerprint recognition chip is designed by AuthenTec, of which Apple acquired for US$356 million in July 2012. Issues related to the original design of the chip reportedly caused the lower yield rates, claimed the sources, adding that Apple outsources the production of the fingerprint recognition chips to Taiwan Semiconductor Manufacturing Company (TSMC) and the packaging of the chips to Xintec.

The report also claims that production for the new device was supposed to start in late June or early July, but because of yield problems the ramp-up will be delayed until late July. According to Digitimes' sources, this will result in Apple delaying shipments of three million iPhone 5S into the fourth quarter. Just yesterday, Jefferies analyst Peter Misek had indicated that "small batch production" of the iPhone 5S had begun last month, with mass production ramping up later this month. 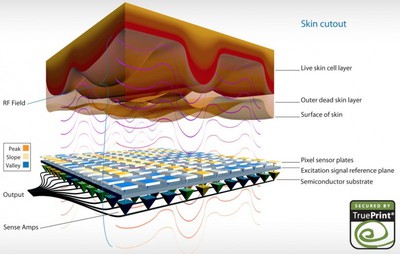 TruePrint fingerprint sensing technology from AuthenTec
Reuters followed up with its own report in late April, mirroring Kuo's report claiming that production issues would likely result in delay's for Apple's newest flagship device.

However, at Apple's Q1 2013 earnings call, CEO Tim Cook warned that predicting future Apple business based on certain supply chain data was "impossible" because the company has multiple sources for components to account for varying yields and inconsistent supplier performance.

Apple's iPhone 5S is expected to launch sometime in the fall.

Woyzeck
So we waited more than 8 months for the new iMac, just because they were unable to produce the screen that no one was waiting for and now we have to wait for the new iPhone because of a sensor that no one needs. Great.

And in the meantime Samsung and the other Android phone manufacturers roll over the market. Maybe that's not the most promising strategy to overcome a loss in market share.
Score: 14 Votes (Like | Disagree)

newdeal
Apple needs to get a serious strangle hold on manufacturers because every single launch is plagued by these issues
Score: 10 Votes (Like | Disagree)


I'd personally wait an extra month to get this new sensor. There are too many passwords to remember nowadays.
Score: 9 Votes (Like | Disagree)

GoCubsGo
I just don't think I follow how anyone could possibly panic over delays in shipments of a product that hasn't been announced with a feature that no one really knows will be included. Who says fingerprint scanning will come on the iPhone 5S? We know there will be a 5S and it will likely be on schedule with all other releases, but doesn't anyone think the fingerprint scanner would be held back for the iPhone 6? That is historically a release that carries even more updates, right?

I always say the "S" of the phones were nothing more than slight improvements to their predecessor. I'm a fan of my 4S, and I'll likely be a fan of the 5S as well, but I'm not sure the fingerprint technology will be included in the 5S.
Score: 9 Votes (Like | Disagree)

So we waited more than 8 months for the new iMac, just because they were unable to produce the screen that no one was waiting for and now we have to wait for the new iPhone because of a sensor that no one needs. Great.

And in the meantime Samsung and the other Android phone manufacturers roll over the market. Maybe that's not the most promising strategy to overcome a loss in market share.


Just more analyst guesses. You might be better to hold back your angst until Apple actually announces a product :D.
Score: 6 Votes (Like | Disagree)


How do we know there is even an issue? This is coming from DigiTimes after all. Not like they have a great track record in reporting anything.
Score: 5 Votes (Like | Disagree)
Read All Comments