Microsoft is planning to drop the prices of its Surface RT tablets by $150, reports The Verge. The lower prices, which will go into effect on Sunday July 14, are likely the result of lackluster sales.

Bloomberg reported in March that Microsoft had sold just 1.5 million Surface RT and Surface Pro tablets since they debuted in October of 2012 and February of 2013, respectively, with 400,000 of those sales attributed to the Pro. HP experienced similarly poor sales with its TouchPad, which was heavily discounted and then discontinued. 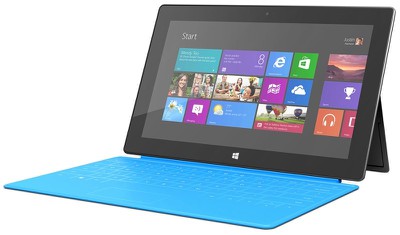 The Surface pricing change comes just after Microsoft announced a restructuring of the company, aiming to enhance collaboration and unify its product lineup. Microsoft has heavily marketed Windows 8 tablets in recent weeks, pitting several different tablets against Apple's iPad in a series of ads that highlight the iPad’s inability to multitask and its lack of built-in productivity software.

With the discount, Microsoft's pricing will be as follows:

Staples has confirmed the pricing cut in a weekly promotional ad that says the new pricing will be available as of Sunday. Despite the pricing cuts, Microsoft has suggested that new versions of both the Surface Pro and the Surface RT are in the works, along with a number of new accessories.

needfx
who's dropping the ball now?
Score: 63 Votes (Like | Disagree)

212rikanmofo
This reminds me of that other tablet that didn't do to well years ago. What was the name? I can't remember. They lowered prices too, and sold out and then never produced anymore. Lol
Score: 47 Votes (Like | Disagree)

furi0usbee
Wow. I read the headline, and did a LOL in my head, then I came here to post it, and see that I was beaten to it by several people. So here it goes, LOL.

What a piece of junk. But hey, that baseball scout sure loved his Windows tablet!!!!! Who would buy these. They could price them down to $100, but that means devs would be running away from the platform. Consumers would stay away as no good apps would be coming. What a mess.

AppleVsAndroid
I would rather own iphone, ipad and windows 7 laptop than this POS.
Score: 29 Votes (Like | Disagree)
Read All Comments

Wednesday May 5, 2021 1:29 am PDT by Tim Hardwick
Encrypted messaging app Signal has had a series of Instagram ads blocked from the social media platform, after it attempted to show users how much data the Facebook-owned company collects about them and how it's used to push targeted ads. In a blog post, Signal described how it generated the ads to show users why they were seeing them, simply by declaring upfront the information that the...
Read Full Article • 82 comments