According to two employees (via 9to5Mac) some Best Buy stores in the United States will offer the Pebble smart watch beginning on Sunday.

The product, which carries an in-stock date of July 7th in the store's inventory system, appears to be limited to Best Buy's brick and mortar locations. 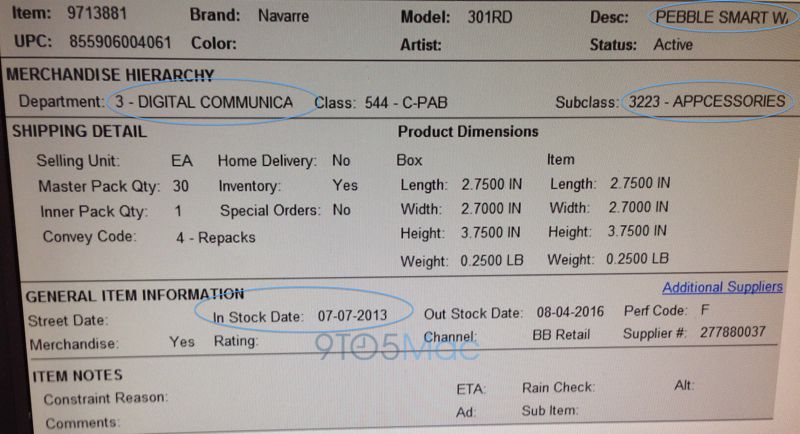 Additionally, the inventory system points to an in-stock date of July 7th, which is the upcoming Sunday. Best Buy typically rolls out specials and new products on Sundays, so this date makes sense. However, an in-stock date could also mean that Best Buy stores are scheduled to receive the product on that date, but sales will only begin a few days later.

First introduced via an enormously successful Kickstarter project, the Pebble smart watch features an e-paper display and integrates with a number of iOS apps thanks to an official SDK released earlier this year.

The popularity of Pebble and other similar devices has spurred multiple companies to look into producing their own smart watches. Apple is currently reported to be developing a smart watch called the "iWatch," while Microsoft, Google, and Samsung all have offerings of their own in the works.

The Pebble smart watch, which is available in an array of colors, sells for $150 on the official website. It is likely that Best Buy will offer similar pricing arrangements.

sulpfiction
Have fun while it lasts, Pebble.
Rating: 7 Votes

No thanks! Pebble is nothing compared to the new Kreyos smart watch on Indiegogo. Voice and motion gesture controlled! Seems like the kind of company apple would buy out.


So, let me get this straight: you are comparing a product that is available NOW, to a product that may not be available in realistic quantities until well into 2014? The Kreyos is so early in it's development that we can't even compare the battery lives.

As long as we are comparing the Pebble to non-existent products, how do we know for sure that the developers of the Pebble don't already have a 'Pebble 2' in the works that could be even better than the Kreyos? Point is, we don't, just as we don't know for certain that the Kreyos will actually see the light of day.
Rating: 5 Votes

I hope this isn't true. I've been waiting for a pre-order since mid-March, if they are throwing inventory into a new channel before filling their existing channels I won't be going through with my pre-order and will wait for a competitor.


There are people that backed the Kickstarter project on the first day more than a year ago and opted for the color white (and even other colors that have been in production for quite a bit longer) that still don't have theirs. I've been waiting for a pre-order since mid-December and I understand your frustration, but there are people who have been waiting much longer and deserve Pebble's attention much more than Best Buy. They still have a list of about 100,000 pre-orders to fill, so I don't see why they feel like they can start selling to people who have never even heard of it before...
Rating: 3 Votes

billyt1963
I think it is great that Pebble has been able to get this into stores, but I still have not gotten my second Kickstarter watch. There are also many
"pre-orders" that have yet to be filled. I wonder how they will be able to keep Best Buy supplied with watches.
Rating: 3 Votes

Jeremy1026
I hope this isn't true. I've been waiting for a pre-order since mid-March, if they are throwing inventory into a new channel before filling their existing channels I won't be going through with my pre-order and will wait for a competitor.
Rating: 3 Votes

bearda
I have a hard time believing they'd put it on retail sale given it's current state. I've used a Pebble daily for a few months and although it's a nice hobbyist item there's a lot needed to get it to prime time.

- On iOS you can reliably receive text/iMessage and control music. That's it. Calendar notifications, email, etc require changing settings every time the connection drops (which will happen randomly) and even then are kind of random. Canceling notifications from the watch (shown on the Kickstarter video) is a pipe dream. I'm told things improve dramatically if you jailbreak, but I can't imagine the average consumer taking that as a requirement.
- Using a Nexus 4 it seems like Android support is better than iOS, but still a mess. This may be a factor of the phone (the Nexus 4's Bluetooth support is surprisingly unreliable) but I get frequent connection drops. Calender, email, gmail, and Google Hangouts notifications work well when the connection to the phone is up, though.
- Bluetooth 4.0 is completely unused. I understand part of that is due to the Android stack situation, but it's been pushed as a feature that's not a feature.
- Replacement power cords are not readily available.

I like my Pebble, and bought it with the expectation that the software would improve. Still, I would think that offering it up in it's current form would result in a LOT of returns. It just doesn't deliver on it's promise at the moment.
Rating: 2 Votes

To those lamenting that fact that they don't have their pre-order yet and can't believe they'd sign up with bestbuy before filling them, I have just one question:
Do you know that they aren't about to receive a shipment of 10 million watches? Because if you aren't, I don't see a problem here.

If they are finally seeing the production ramp up, then it's only natural to start signing up new avenues for sales. And of course, you'd start those negotiations way earlier, and just stipulate that new partners will only see the excess inventory. Unless of course someone knows otherwise, I'd suggest no one panic just yet.


The thing is that as a backer and a pre-order customer, you expect being able to get a product BEFORE it's available for anyone else. If they're getting a shipment of ten million watches and start selling them in BB on Monday - the ones that made the sale via BB possible will be getting their watches AFTER your average Joe can get one.

Say you book a table at a restaurant for four people. You're there on time with your three friends and the head waiter apologises, but you'll have to wait in the bar for a little while. A few minutes later, four people drop in and asks if they have a table for four. The head waiter says "yes, of course, right this way".

Now, even if the head waiter looks at you and says "your table is ready, I'm just going to seat these people, I'll be right with you", wouldn't you expect that as a person that called in advance to book a table and are waiting, the head waiter should take care of you before he takes care of people who just dropped in?
Rating: 1 Votes

I hope this isn't true. I've been waiting for a pre-order since mid-March, if they are throwing inventory into a new channel before filling their existing channels I won't be going through with my pre-order and will wait for a competitor.


Oh - you're still waiting for a preorder watch? I'm still waiting for my watch that I pledged for on kickstarter after day 3 of their campaign, over a year ago. If someone's able to walk into a store and buy one before I even get mine, I'm going to be severely annoyed.

Pebble have utterly mismanaged this entire thing from the day they got their cash in hand.
Rating: 1 Votes