Kickstarter is a popular place for wild ideas to gain some traction, but sometimes an idea clicks with so many people it's possible to wonder why no one thought of it before. Such is the case with the Pebble digital wristwatch.

It uses an e-paper display, similar to the screen on the Amazon Kindle, and connects to the iPhone (and Android devices) via Bluetooth. Pebble uses vibrating alerts to tell the wearer of incoming calls, emails, calendar alerts, Facebook and Twitter messages, weather alerts and more. It also has an extensive SDK for developers and its own "Pebble watchapp store". It will also be waterproof enough to swim with, but it will not be a dive watch.

The company behind the watch even has experience with smart watches. Pebble has been making a BlackBerry-compatible watch called the inPulse, and is a graduate of the Y Combinator startup incubator. It has now received pledges for $3.8 million from 26,500 backers on Kickstarter for a watch that will retail somewhere around $150 when it goes on sale this fall.

An article by Bloomberg notes that Kickstarter wasn't Pebble's first choice for raising funds. He tried to raise money via traditional venture capital firms, but "few investors were interested in betting on a hardware startup, or dealing with the headaches that often come with manufacturing goods." However, Kickstarter seems to have worked out very well. The watch is the most funded Kickstarter project ever.


Pebble told MacRumors that it's treating Kickstarter as a discounted pre-order mechanism, and once the funding period closes in a month it will continue taking orders on its website. US buyers can preorder a Jet Black Pebble watch via Kickstarter for $115, while foreign buyers will pay slightly more to cover shipping.

torroa
The 21st century answer to the 80´s calculator watch...just as nerdy ,) 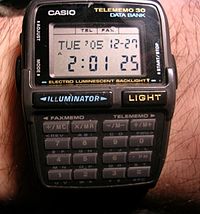 They say the battery will last around a week.


I think he was talking about the phone.

Nice idea. But with Bluetooth on all the time I think you could safely say goodbye to your battery.


I always have bluetooth on during the weekends when I am home driving around, battery lasts the same.
Score: 25 Votes (Like | Disagree)

Nice idea. But with Bluetooth on all the time I think you could safely say goodbye to your battery.


I have bluetooth on all the time (paired to my headset). Has barely impacted battery life (I'd say 2-3% thru the whole day). I would of thought that this watch would use the BT 4.0 built-in to the 4S which would draw even less power.
Score: 22 Votes (Like | Disagree)

gnasher729
From "The Hitchhiker's Guide To The Galaxy":

Orbiting this at a distance of roughly ninety-eight million miles is an utterly insignificant little blue-green planet whose ape-descended life forms are so amazingly primitive that they still think digital watches are a pretty neat idea.


Somehow this just sprang to my mind when I saw this ugly thing. :mad:
Score: 18 Votes (Like | Disagree)

verniesgarden
4 million dollars, the company is already successful without even shipping a product.
Score: 18 Votes (Like | Disagree)

They say the battery will last around a week.


I was talking about the battery of your iPhone.

I have bluetooth on all the time (paired to my headset). Has barely impacted battery life (I'd say 2-3% thru the whole day). I would of thought that this watch would use the BT 4.0 built-in to the 4S which would draw even less power.

Friday April 9, 2021 2:22 am PDT by Tim Hardwick
It's no secret that Apple sees iMessage as a big enough selling point to keep the service exclusive to Apple devices, however new court filings submitted by Epic Games in its ongoing lawsuit with the company reveal just how Apple executives have rationalized their decision not to develop a version of iMessage for Android. Apple clearly recognizes the power that iMessage has to keep users...
Read Full Article • 346 comments

Friday April 9, 2021 4:58 am PDT by Sami Fathi
According to market data compiled by Counterpoint Research, Apple's smallest iPhone since the 2016 iPhone SE, the iPhone 12 mini, struggled to obtain a spot in the top five list of best-selling smartphones in January of this year. According to the market data, the iPhone 12 mini came in eighth place for the best-selling smartphone worldwide in the first month of the year. However, the iPhone ...
Read Full Article • 263 comments

Saturday April 10, 2021 6:00 am PDT by MacRumors Staff
Apple's AirTags may still be nowhere to be seen nearly two years after signs of them were first discovered, but Apple this week launched its Find My network accessory program that will let third-party devices integrate with the Find My app on Apple's platforms to make it easy to keep track of your items. This week also saw fresh rumors about the upcoming "iPhone 13" and new iMacs, while...
Read Full Article • 36 comments