Back in June 2011, Apple launched Final Cut Pro X, a complete reworking of the company's video editing software aimed at professional users, but the new software was met with significant criticism over missing features. Professional users in particular were upset over what seemed to be a "dumbing down" of Final Cut Pro in order to reach more mainstream users.

Apple responded to the controversy by offering refunds to dissatisfied customers and promising updates to improve Final Cut Pro X, and a number of those updates have been delivered over the past 21 months. 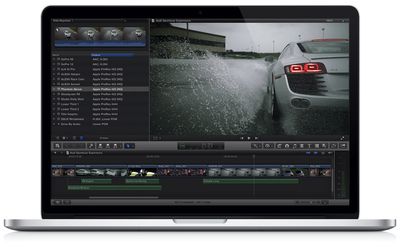 The Los Angeles Times now reports that Apple is launching a new marketing campaign today intended to try to win back some of the professional users who may have abandoned the platform.

Now, after updating the software seven times since its release in 2011, Apple is launching a campaign Thursday aimed at winning back skeptical professional users.

That campaign, timed to coincide with the National Assn. of Broadcasters convention that starts April 6 in Las Vegas, will feature users like Julian Liurette, who followed the firestorm from his video editing desk in Toronto at the Globe and Mail newspaper.

After waiting a year as Apple gradually released updates, Liurette finally gave it a try and was surprised. So Liurette began moving the newspaper's video operations from the old version to Final Cut Pro X.

The report notes that Apple has won points for its FAQ posted soon after launch outlining the company's improvement plans, as well as for a free trial offer for Final Pro X, but that many users remain skeptical of Apple's commitment to professional customers. But with professionals becoming increasingly uneasy about the future of Apple's main competitor Avid and concerned over how long Final Cut Pro 7 will remain supported, Apple is hoping that they will take a fresh look at Final Cut Pro X.

Update 11:42 AM: Apple's new features on Tsui Hark and The Globe and Mail have gone live on Apple's "In Action" page, but we haven't yet spotted a feature on TV Azteca.

vmachiel
Don't be mad guys this is fantastic news. The fact that they want the pro's and "prosumor" back makes it more likely that they will in fact, release a new mac pro.
Score: 29 Votes (Like | Disagree)

MultiMediaWill
All hope was lost when they first released it. I see no worth in trying to win back the 'professionals'. We have already moved on.
Score: 26 Votes (Like | Disagree)

All hope was lost when they first released it. I see no worth in trying to win back the 'professionals'. We have already moved on.


I take it by that you mean to other platforms? Whist it may be true for some professionals it isn't true for all people - indeed some have stayed where there are and just watching.

There are a significant number of foolish people who have jumped to FCP X and discovered it to be a powerful beast for them. At least one BBC Network show is being cut weekly on X.

Let's not forget FCP X has had one of the most rapid release cycles for any product. Less than an year after the release we are on .0.7 with two of those releases bringing significant updates.

If you haven't tried it since day one you should revisit it as it is much more powerful.

The timing of this campaign is of course very significant, NAB starts next week and it will be a year since X was released. There are strong hints that the next major release will coincide with NAB and some of the new features have been regularly touted.

Keep it coming I say. I'm working faster and better in X - my clients pay me the same, get a better product and I spend more time with the kids. Almost a win win situation.
Score: 20 Votes (Like | Disagree)
Read All Comments

Sunday September 25, 2022 6:50 am PDT by Sami Fathi
Apple may decide to release its remaining products for 2022, which include updated iPad Pro, Mac mini, and 14-inch and 16-inch MacBook Pro models, through press releases on its website rather than a digital event, according to Bloomberg's Mark Gurman. In his latest Power On newsletter, Gurman said that Apple is currently "likely to release its remaining 2022 products via press releases,...
Read Full Article • 160 comments