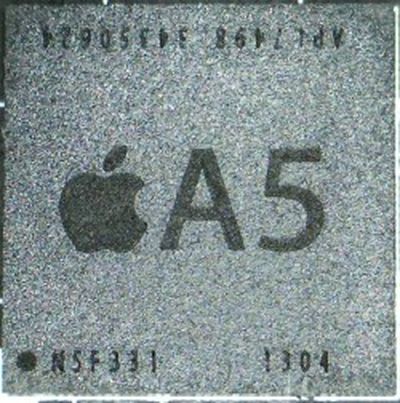 Back in late January, an update to the Apple TV software revealed a new "AppleTV3,2", with FCC documents for the device showing up the following day. By digging into the software files for this new device, it was discovered that the device appeared to be using an A5X chip rather than the single-core A5 chip found in the third-generation Apple TV.

This conclusion was based on the chip carrying an identifier of S5L8947 compared to the S5L8945 seen on the original A5X. A similar move was made when Apple rolled out a die shrink of the A5 in the third-generation Apple TV last year, shifting from the original S5L8940 to the smaller S5L8942.

According to Apple, this latest Apple TV update was designed to be invisible to users, offering no changes in features.

Apple's tweaked third-generation Apple TV, which carries a part number of A1469 compared to an A1427 part number for the original version, has now begun making its way into Apple's retail store stocks, and we have purchased one and cracked it open to examine its internals.

Most notably, the tweaked third-generation Apple TV does not contain an A5X chip. Instead, it contains an A5 chip like its predecessor, although the new chip is considerably smaller than the previous one.

This new A5 found in the tweaked third-generation Apple TV is considerably smaller still, with our measurements putting the chip at just 6 mm by 6 mm.

We do not know for sure what Apple is using to produce this even smaller A5, but it is very possible that the company is piloting a 28-nanometer process from Taiwan Semiconductor Manufacturing Company (TSMC) for this new chip. Such a move would be a major development, making this A5 the first iOS device processor to be manufactured by a company other than Samsung. Samsung is also moving to a 28-nanometer process for its fab in Austin, Texas where it produces chips for Apple, but the facility will reportedly not be ready for mass production at that scale until late this year.

TSMC has been rumored to be coming on board for A6X chip production for the current iPad, as well as for future chips using even smaller processes.

ConCat
I don't see why it would have contained an A5X chip. The A5X was the same chip as the A5, just with more GPU cores. The AppleTV does not need them.

Waiting for Amazon Prime added to Apple TV and other streaming apps until than I will wait for the next generation Apple TV, whenever that is.

I have an Apple TV, but I want this. And HBO Go.

Whats the point in using shrunken chip, and not the new one.
My guess is this chip only makes it harder to jailbreak.


You are correct. Have you seen the size of the lock on the new chip? Nobody makes a lock pick set that small! Don't even get me started on finding a source of tiny bits to program with. :mad:
Score: 8 Votes (Like | Disagree)

TsMkLg068426
Waiting for Amazon Prime added to Apple TV and other streaming apps until than I will wait for the next generation Apple TV, whenever that is.
Score: 7 Votes (Like | Disagree)

While I most certainly appreciate _All_ the news MacRumors brings us, it's things like this that are so trivial, that the average buyer doesn't care about.

It's a reflection of anything bigger to report on, like something truly substantial to report about regarding the next iPhone.


This is the first Apple chip with 28nm die size. Since the chips are of enormous importance to the products this is a pretty big deal. The more Apple can reduce the die size the more other stuff such as battery or other silicon can be added to the products.
Score: 6 Votes (Like | Disagree)

I have an Apple TV, but I want this. And HBO Go.

... Or they could just open up the platform to developers...

... So you don't have to wait for Apple to add features at a glacial pace...