Alongside today's release of iOS 6.1, Apple also issued an update for the Apple TV. The new 5.2 software update includes a number of enhancements including direct iTunes in the Cloud music streaming, Bluetooth keyboard support, Up Next support, and more.

- iTunes in the Cloud: Browse and play your purchased iTunes music directly from iCloud.
- Bluetooth keyboard: Use your Apple Wireless Keyboard to control your Apple TV. See this article for more information.
- AirPlay audio for videos: Send stereo audio from movies, TV shows, and other videos on Apple TV to AirPlay-enabled speakers and devices (including AirPort Express and other Apple TVs).
- Stability and performance: Includes performance and stability improvements with the iTunes Store, AirPlay, Netflix, iTunes Match, and wired Ethernet connections. 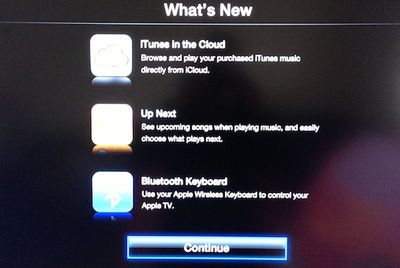 Curiously, Apple has released three versions of the Apple TV update, covering not only the second-generation (AppleTV2,1) and third-generation (AppleTV3,1) boxes but also a new AppleTV3,2 box. It is unclear exactly what the difference is with the new box, but the numbering scheme suggests that it is a relatively minor change.

Three versions of Apple TV 5.2 update (Source: e-lite.org)
KGI Securities analyst Ming-Chi Kuo noted earlier this month that Apple was preparing to launch an updated Apple TV this quarter, although it was anticipated to be a minor upgrade. Apple has not, however, made any public announcements regarding an updated Apple TV.

Update: Apple appears to be referring to the new Apple TV model with a code name of J33I, compared to the J33 code name used on the third-generation Apple TV. While we have no direct evidence, it is possible that the "I" simply refers to an international variation of the current box. Just last month, Apple launched iTunes movies in nearly four dozen new countries.

I want to see NAS support so I don't have to have my main Mac on all the time, just to watch a movie. It's not an unusual request, Apple. :rolleyes::rolleyes:

Virtually every other network streaming player out there does this.
Score: 22 Votes (Like | Disagree)

I want to see NAS support so I don't have to have my main Mac on all the time, just to watch a movie. It's not an unusual request, Apple. :rolleyes::rolleyes:

Virtually every other network streaming player out there does this.


It would be better if they just put a freakin hardrive back in. Stupid move taking out.
Score: 8 Votes (Like | Disagree)

Yeah, it's weird that their iOS app doesn't allow Airplay. Maybe they want people to use the Apple TV's built in Netflix app.

Exactly. Why bother with the Netflix iOS app over AirPlay when the TV has a Netflix app built-in?
Score: 7 Votes (Like | Disagree)

ThisIsNotMe
How about an actual feature that was promised last year like I don't know Airplay Direct???
Score: 7 Votes (Like | Disagree)


Question... why would you need Netflix over AirPlay when it's built into the Apple TV itself?
Score: 6 Votes (Like | Disagree)
Read All Comments

Tuesday November 30, 2021 8:08 am PST by Joe Rossignol
Apple plans to release a third-generation iPhone SE in the first quarter of 2022, according to Taiwanese research firm TrendForce. If this timeframe proves to be accurate, we can expect the device to be released by the end of March. As previously rumored, TrendForce said the new iPhone SE will remain a mid-range smartphone with added support for 5G:In terms of product development, Apple is...
Read Full Article • 95 comments