BrightWire reports on an article from Chinese web portal Tencent claiming that Apple CEO Tim Cook discussed during his visit to China last week the company's plans to establish a research and development center in Beijing. The report includes several other items of information pointing to Apple's continued efforts to strengthen its presence in the rapidly growing Chinese market.

- Cook also noted that Apple will move a certain amount of its servers for App Store and iTunes to China in order to improve the downloading speed for users in China.

The report also cites "IT insiders" claiming that Apple is likely to set up its Chinese data center in either Zhangjiakou to the northwest of Beijing or in Inner Mongolia. 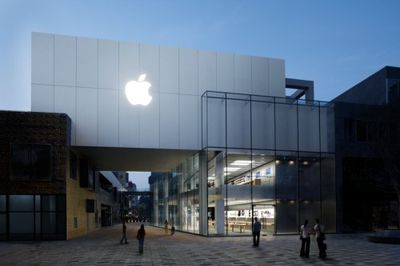 Apple's Sanlitun retail store in Beijing
Tim Cook shared some of his thoughts on the Chinese market during his visit to the country, noting that Apple has plans to build more than 25 retail stores in the Greater China region and that it is working hard to speed up the regulatory approval process for its products so that they can launch closer to the first wave of debuts.

Apple has been looking to open research and development centers outside of the United States, seeking to draw upon international expertise for some of its technological advances. The company has already moved forward on a center in Israel, and there had previously been claims that Apple was exploring the possibility of a research center in Russia, although those talks do not appear to have yielded any commitments.

Radio
This must be Tim's plan to move more jobs to the USA
Score: 9 Votes (Like | Disagree)

The Chinese are not capable of keeping Apple secrets. :D
Score: 7 Votes (Like | Disagree)

oiuh151
Apple should become a more American company, not a more Chinese one. :rolleyes:
Score: 5 Votes (Like | Disagree)

WardC
I miss the pride in owning a USA-built Apple Computer.

Apple built all their computers in Fremont, California for many years, and employed US workers. Now a Foxconn factory in a foreign land employs non-US workers who earn menial wages and work 17 hours a day sometimes to build hardware for a company that has turned into a money-focused and money-driven machine.

Asia8
Apple headquarters may still be in America, but it's more an international company now. It's more about the money than any true corporate ideology.

Any actions of such a nature are simply to keep up customer loyalty and keep the illusion in Americans hearts that they're buying American products.

Unfortunately for America in recent years it's international reputation has been driven further and further into the dirt, while at the same time China has been improving at amazing speeds.

Maybe the Age of America is up, all great empires eventually crumble.

While life in America became more and more easy, the need for people to compete and fight for a better life slowly vanished as things became too easy. Once you stop improving, you just start slowly falling backwards.

China has a crazy population with killer competition, some of the types of things I've seen these students studying in Chinese universities I'd never even encountered in my western education. Whilst entrepreneurial ambitions may be lacking, never underestimate the knowledge and abilities of many of Chinese.

In recent years more International Chinese have been returning to China than ever before, first tier cities are becoming very impressive, while second and third tier cities are also showing rapid development.

There used to be great incentives for scientists and those of great ability to immigrate to America, but those days seem to be over. Possibly from too much external investment (war), and too little internal investment (education, development, and infrastructure).

There are many many reasons for Apple to work hard at penetrating into China and try to gain more product loyalty. There is a huge potential customer base, a great, skillful, knowledgeable and cheaper (easier to please) employee base and a very bright and brighter everyday future in China.

Also what a better place to learn about consumer needs in China, than in China? Google failed to understand Chinese culture and Chinese needs, and we all know how Google gave up in China, claiming their exit on "ethical reasons" while they had very little market penetration due to their inability to adapt to Chinese needs.
Score: 2 Votes (Like | Disagree)

conancn
Not related to the content, but the pic is def outdated.