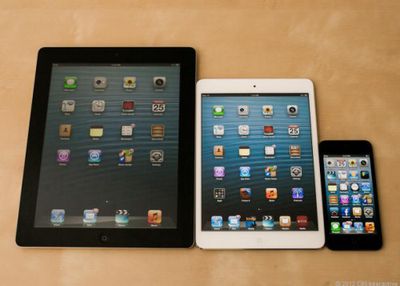 Image from CNet
The changes include a faster A6X processor running at 1.4GHz allowing the device to run twice as fast as its predecessor. The new processor doesn't worsen battery life. Engadget's testing even showed it to be slightly improved. The front facing camera has been upgraded to take HD video, and the only other external change is the replacement of the 30 pin dock connector with the new smaller Lightning connector. CNet sums it up:

The latest iPad adds several tweaks and improvements to secure its position at the top of the tablet heap. It's better all around, but third-gen owners need not apply.

The other interesting effect the new iPad has on Apple's product line is that it increases the gap between the iPad 2 and the "new iPad". Apple has chosen to keep the iPad 2 at the $399 starting price point and simply retired the 3rd Generation model, replacing it with the new one. That $100 difference between the two models now represent a larger feature gap than before.

notjustjay
Lovely. My "new iPad" lasted all of 7 months. Is that the shortest product life cycle ever for an Apple product?

(Of course, it still works fine, and I will continue to use it. It's just never a nice feeling knowing your product got superseded by the new model -- twice as fast even -- while yours isn't even out of warranty yet. Oh well...)
Score: 22 Votes (Like | Disagree)

Sixtafoua
The reviews are in: the 4th gen iPad does in fact have a lighting connector.
Score: 21 Votes (Like | Disagree)

AngerDanger
Lightning Port – wow, how insightful. It's nice when reviewers take the time to highlight all the hidden features. :rolleyes:
Score: 12 Votes (Like | Disagree)

Got my iPad 3 in April and see no compelling reason to get the 4. Will wait another cycle or 2 as long as this one works for me.

You shouldn't feel compelled at all to upgrade. I am glad you aren't. THe iPad3 is a great piece of hardware and there is no reason to move from it to the new iPad refresh.
Score: 11 Votes (Like | Disagree)
Read All Comments

Monday September 26, 2022 7:34 am PDT by Sami Fathi
Today marks exactly two weeks since Apple released iOS 16 to the public. Besides the personalized Lock Screen, major changes in Messages, and new features in Maps, the update has also seen its fair share of bugs, performance problems, battery drain, and more. After major iOS updates, it's normal for some users to report having issues with the new update, but such reports usually subside in...
Read Full Article • 181 comments