Apple today introduced "the next iPad", the latest generation of the company's popular tablet device. Offering a Retina display measuring in at 2048 x 1536 pixels, Apple claims that it is "redefining the category Apple created" with the original iPad. At 264 pixels per inch, the new display is considered Retina quality with indistinguishable pixels when held at the typical viewing distance of 15 inches.

Featuring an A5X system-on-chip with quad-core graphics, the Retina display offer 44% greater color saturation than its predecessor. All of Apple's stock apps have been optimized for the new ultra-high resolution display and existing apps from third-party developers will be automatically scaled up with text rendered for the new resolution. With additional work, developers can also optimize their entire apps for the new display. 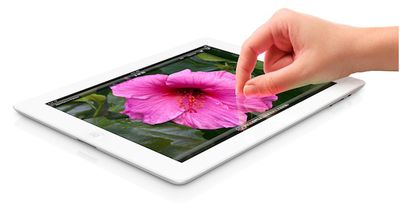 On the camera front, the updated iPad features a 5-megapixel rear camera with advanced optics very similar to those found in the 8-megapixel camera on the iPhone 4S. 1080p video recording is also supported. Voice dictation as found on the iPhone 4S is also included.

Cellular-capable models of the new iPad also support 4G LTE as had been rumored by multiple sources. Supporting data speeds of up to 21 Mbps on HSPA+, 42 Mbps on dual-carrier HSPA+, and 73 Mbps on LTE, the new iPad offers a significant improvement in cellular data capabilities. LTE partners include AT&T and Verizon in the United States and Rogers, Telus, and Bell in Canada. Due to differences in frequency bands, AT&T and Verizon support will require separate models.

OK what a joke of an update. After the 4s how could anyone expect more. So this is being marked as retina at 264 ppi. Oh wait that's at 15 inches away. Gotta love Apple and their marketing words. But of course they tailor their marketing to the level of intelligence of their customers. So you can't really fault them.

Do you hold your tablet as close to your face as you do your phone. If you're still so annoyed go and build your own true Retina Display tablet and ship it.
Score: 26 Votes (Like | Disagree)

troop231
So it looks like Apple has dropped the numbering system from the iPad? :)
Score: 24 Votes (Like | Disagree)

jmnikricket
It sucks when you read MR daily and so nothing unexpected happens (and on top of it you are slightly disappointed that some of the crazier rumors didn't pan out) :-/

Still want one though ;-D
Score: 14 Votes (Like | Disagree)
Read All Comments

Sunday May 15, 2022 6:14 am PDT by Sami Fathi
iOS 16 will include new ways of interacting with the system and some "fresh Apple apps," Bloomberg's Mark Gurman has said, offering some more detail on what Apple has in store for the upcoming release of iOS and iPadOS set to be announced in a few weeks at WWDC. In the latest edition of his Power On newsletter, Gurman wrote that while iOS 16 is not likely to introduce a major face-lift to...
Read Full Article • 200 comments