In the lead-up to major Apple product launches, there are almost inevitably reports of production problems that result in the company having lower stocks on hand than it initially hoped for, sometimes leading to extended shortages as the company's supply chain works to catch up to demand. The iPhone 5 was no different, with yield issues on the new in-cell displays used in the device reportedly being the bottleneck that has limited availability.

With The Wall Street Journal now reporting that mass production of the "iPad mini" has begun, reports are once again suggesting that Apple's launch supplies may be on the low side due to issues with several components.

One such report comes from Topeka Capital Markets analyst Brian White, who is currently in Taiwan meeting with a number of contacts in the component supply chains for Apple and other companies. White's contacts believe that yield issues with several iPad mini components have been "frustrating", with supplies of the device likely to be constrained for the first month of availability heading into the holiday shopping season.

Similar to the iPhone 5, we sensed that suppliers have found the specs around Apple's (AAPL-$671.45: Buy) 7.85-inch "iPad Mini" to be a challenge and yields have been frustrating. In our view, this is the reason the "iPad Mini" is 4-6 weeks behind our original launch expectation that we discussed in June. Despite continued yield challenges, the supply chain feels the much anticipated iPad Mini is on track to reach acceptable volume levels for a launch over the next month. That said, we believe that supply constraints will initially hold back the full sales potential during the first month or so of the launch.

White believes that Apple may sell 5-7 million iPad minis through the end of the quarter, somewhat below more optimistic estimates from other analysts that have put the number closer to 10 million. As with the iPhone 5, product availability for the iPad mini may actually be the limiting factor for early sales, making it difficult to assess true consumer demand. 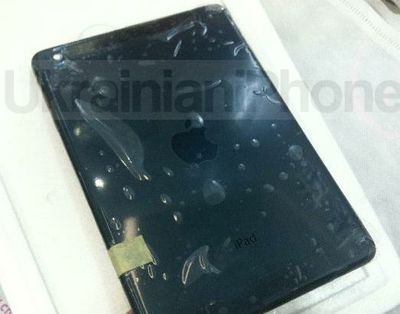 Claimed black iPad mini rear shell
A pair of reports from Digitimes tell a similar story, with one article claiming that AU Optronics' production of the iPad mini display panels has been below expectations with just 400,000 panels shipped in the third quarter compared to a goal of two million for the manufacturer.

Apple is expected to ship 9-10 million units of the new tablet in the fourth quarter, but it remains to be seen whether AUO and LG Display - the other panel supplier for iPad Mini - can meet the target, the sources said.

A goal of five million panels for iPad Mini was set for the third quarter but later had to drop to one million due to low yield rates, with LG Display and AUO comprising 60% and AUO 40%, the sources said.

The second report from Digitimes indicates that chassis makers are also struggling with yield issues.

Along with the latest market rumors indicating that Apple is likely to unveil the much speculated iPad mini on October 17, sources in Apple's supply chain in Taiwan are also indicating that shipments of the iPad mini tablets are not smooth at the moment due to low yield rates at chassis makers.

Case makers Foxconn Electronics, Catcher Technology and Ri-Teng Computer Accessory are responsible for production of the iPad mini chassis, the sources indicated. Ri-Teng is an associate company of Pegatron.

The report claims that the iPad mini will be available in two body colors, native aluminum and black-anodized aluminum as seen with the iPhone 5, with the black version experiencing greater production issues due to the scratching vulnerability of the anodized chassis.

I hope they don't release a new new ipad. I just but a new ipad. I will shoot my self if they do.


You do realize that your new iPad will not cease to function, or get slower, when a newer iPad is released, right?
Score: 26 Votes (Like | Disagree)

The Samurai
Would of been happy if it was iMac production issues.... at least we would of known they are round the corner :D
Score: 21 Votes (Like | Disagree)

Could you please leak a few details about the Mac Pro and iMac to assure us that WE computer users know that you haven't forgotten us?

And, does Apple even have a department related to these computers or has everyone at Apple been moved over to the iPad and iPhone departments?
Score: 20 Votes (Like | Disagree)

Flood123
When AREN'T there issues in the production process these days?
Score: 17 Votes (Like | Disagree)

I hope they don't release a new new ipad. I just but a new ipad. I will shoot my self if they do.


Hope you have your gun ready then.
Score: 14 Votes (Like | Disagree)

I see no point for this product

but I dont carry a purse, or read 50 shades of Aluminum