Wednesday October 3, 2012 2:11 am PDT by Arnold Kim
The Wall Street Journal reports that Apple has started mass production of the iPad mini.

Apple Inc.'s Asian component suppliers have started mass production of a new tablet computer smaller than the current iPad, people with knowledge of the situation said, as the Silicon Valley company tries to stay competitive against rivals such as Google Inc. GOOG -0.63% and Amazon.com Inc. AMZN -0.56% that are offering smaller, less-expensive alternatives to the iPad.

The Wall Street Journal cites two sources who also confirm that the iPad mini will use a 7.85" screen with a lower screen resolution than the 3rd Generation iPad. The iPad Mini has been previously rumored to have a 1024x768 pixel display. 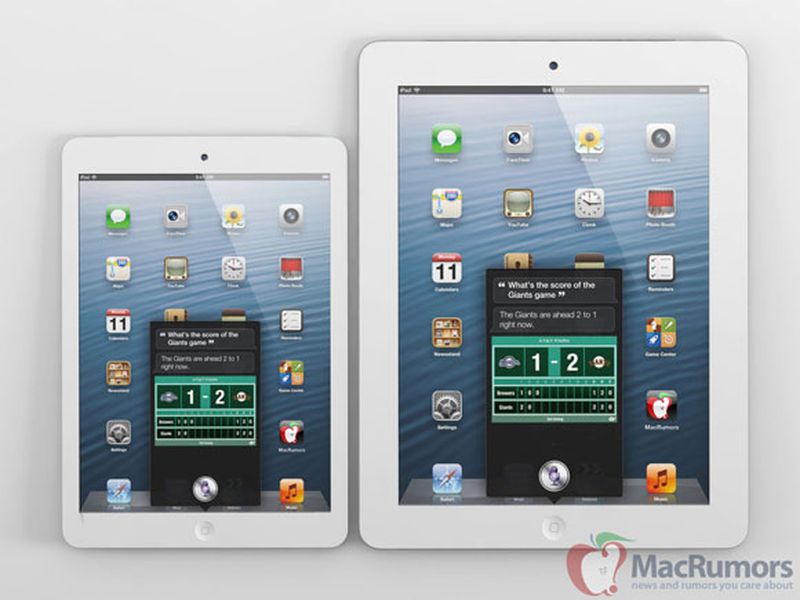 The report comes just after a similar claim from Japanese site Mac Otakara, who specified that the iPad mini had begun production in Foxconn's factories in Brazil. The Wall Street Journal's report seems to provide additional confirmation. Recent reports have suggested that the iPad Mini media event will take place in October.

needfx
Apple will be tripling down on secrecy next year, since just doubling failed miserably
Rating: 44 Votes


Exactly! the lack of iMac rumors (in comparable numbers to iPad mini and what we saw with iPhone 5) really worries me
Rating: 24 Votes

PDFierro
I really find it hilarious that there are still people saying this isn't going to happen.
Rating: 22 Votes

Does WSJ have a good track record for predictions?


yes, they generally do.

tekno
I wonder if the iPad Mini will come with the same wifi issues, bluetooth drop-outs, scuffs, scratches, dents, camera purple-fringing, terrible Maps app, lack of accessory support and with no adaptors available.

This is, after all, the Apple we've all come to know and love...
Rating: 11 Votes

chumpy34
Maybe they will get "Mini-Me" from Austin Powers to do the product reveal with Tim Cook:)
Rating: 11 Votes

This is sooooo not going to happen. And if it does will be Apple's biggest blunder in a long time.


Good insights. Thanks. Having considered your comment, I've just crossed buying an iPad Mini off my wish list entirely. So Apple would definitely be foolish to move ahead with this now.
Rating: 8 Votes


Yep, still no pics of a new iMac in production. Doesn't look good. Don't give a flying ****** about a small iPad. The one I have is perfectly fine.
Rating: 8 Votes