9to5Mac reports that Apple will moving away from Google Maps services in iOS 6, making the transition to an in-house mapping service that included 3D views. According to the report, Apple's prior acquisitions of mapping companies Placebase and Poly9 are ready to bear fruit, with last year's purchase of 3D mapping firm C3 Technologies rounding out the suite of services.

The most important aspect of the new Maps application is a powerful new 3D mode. The 3D mode does not come enabled by default, but users simply need to click a 3D button that is conveniently and visibly stored in the app. Perhaps under the fold like the current traffic, pin, and map view buttons. This 3D mode is said to essentially be technology straight from C3 Technologies: beautiful, realisitic graphics based on de-classified missile target algorithms.

Apple's in-house mapping services will otherwise be rather similar in appearance to the current Google Maps application, although Apple's implementation is said to be a "much cleaner, faster, and more reliable experience" and will include a new icon based on the same view of the company's Infinite Loop headquarters in Cupertino but with new colors and styling. 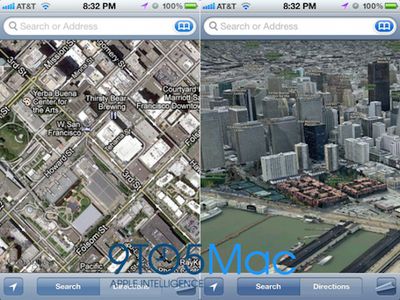 Current Google Maps aerial view (left) compared with mockup of Apple's 3D mapping mode (right)
Apple has clearly been working for some time to reduce its reliance on Google by developing its own mapping services for iOS, as evidenced by its acquisitions of mapping expertise and job postings addressing its ambitions for mapping. The company has already moved location services in-house and revealed last year that it is building a crowd-sourced traffic database based on users' GPS data.

With the release of iPhoto for iOS back in early March, Apple took its first big step outside of the actual Google mapping services, taking advantage of OpenStreetMap and other services to generate its own map tiles for the application's Photo Journals feature.

Apple is expected to preview iOS 6 at next month's Worldwide Developers Conference in San Francisco, with the operating system presumably making its public debut alongside new iPhone hardware later in the year.

Update: AllThingsD says that it has independently confirmed the claim.

We’ve independently confirmed that this is indeed the case. Sources describe the new Maps app as a forthcoming tent-pole feature of iOS that will, in the words of one, “blow your head off.” I’m not quite sure what that means, and the source in question declined to elaborate, but it’s likely a reference to the photorealistic 3-D mapping tech Apple acquired when it purchased C3 Technologies.

Ryox
I hope they don't get rid of over head simple, easy to read 2d map altogether.
Score: 24 Votes (Like | Disagree)

imthenachoman
Really? All that money and they are working on 3D? 3D is a gimmick. I want to see voice guided GPS. Is that too much to ask?
Score: 20 Votes (Like | Disagree)

jason2811
Maps is in terrible need of an update. They definitely need to add turn-by-turn navigation.
Score: 20 Votes (Like | Disagree)

androiphone
but will the map data be as good as google maps?

will I be able to zoom in to a random country outside of the US and have the detail that comes from google maps? considering that even bing maps is pretty poor at the moment I'm not holding out much hope for these maps.
Score: 14 Votes (Like | Disagree)

It's transitional. Apple has to start somewhere, just like Google once did. When Street View was first available how many cities were covered? Not many. If you live in East Bumbleside then you have to expect to not be first on companies update target.


I fully understand that getting map data takes time but Apple have to be careful about removing services that people already have and that fully work.

if they implemented a solution that didn't have the same level of service as Google Maps provides then Apple could be in some pretty hot water, as customers who could easily zoom into their house one day the next (after the update) are left high and dry. (ie one day fully functional the next worthless)

Not to mention that there are laws (at least here in the UK) preventing a company selling you a product then issuing firmware updates that remove working features.
Score: 13 Votes (Like | Disagree)

hppy29
I'm all for change but will this be another "USA Only" thing? Leaving the rest of world and Europe out? Whilst this is great I would rather they update things like Siri to cover the UK or update iTunes with 1080 movies (yes I know its the content provider)
Score: 13 Votes (Like | Disagree)
Read All Comments

Monday January 24, 2022 9:20 am PST by Juli Clover
AT&T today announced the launch of upgraded AT&T Fiber plans, which support speeds of up to 5 Gigabits for some customers. There are two separate plans, one "2 GIG" plan and one "5 GIG" plan, available to new and existing AT&T Fiber subscribers. According to AT&T, the new plans are available to nearly 5.2 million customers across 70 metro areas including Los Angeles, Atlanta, Chicago, San...
Read Full Article • 239 comments