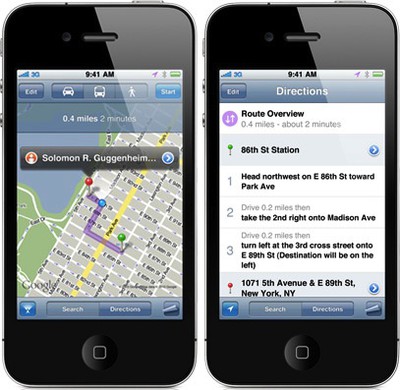 As part of its Q&A regarding location tracking posted earlier today, Apple discloses that it is currently collecting "anonymous traffic data" from users' devices with the aim of providing an "improved traffic experience in the next couple of years".

What other location data is Apple collecting from the iPhone besides crowd-sourced Wi-Fi hotspot and cell tower data?

Apple is now collecting anonymous traffic data to build a crowd-sourced traffic database with the goal of providing iPhone users an improved traffic service in the next couple of years.

That traffic experience would presumably be built on top of a turn-by-turn navigation system separate from the Maps application included in iOS and driven by Google.

In November 2009, an Apple job posting described an iPhone engineering position that would help take Maps "to the next level". The company followed that up last December, with a set of four job listings seeking iOS engineers with experience in developing navigation software, further fueling speculation that Apple is working on its own navigation system.

On a broader scale, Apple has increasingly looked to beef up its own mapping and geolocation services in an attempt to distance itself from Google, which has provided the core Maps application for the iPhone since the device's 2007 debut. Apple acquired mapping company Placebase in July 2009 and followed that up by purchasing small Canadian mapping firm Poly9 one year later. Apple also moved its location services for iOS in-house with the release of iOS 3.2 on the iPad in April 2010, separating itself from Google and Skyhook Wireless for such services.

Google has offered free turn-by-turn navigation on Android since late 2009 and had hinted at that time that it could bring the service to iOS, although the company later backpedaled from those claims.

LOL...really macrumors?! Are you guys that poor at comprehension?!?! I think a 5 year old could tell you they mean network traffic!


I'm not so sure.... I think it could easily be interpreting both ways. but that last part about providing a superior "traffic service" makes me think it means road traffic. What kind of "traffic service" would they provide for network traffic? It would read something along the lines of "to minimize [network] traffic" or "to provide superior reception". But to provide a traffice service implies road traffic.

So get off your high horse, even if it does mean network traffic (which I don't think because of what I said) there are easily ways to interpret for both
Score: 4 Votes (Like | Disagree)

ChazUK
Garmin/Tomtom and co should be scared.
Score: 4 Votes (Like | Disagree)

I wonder what over profit generating uses Apple intends to use location data, collected with location services off, in the future ?


The better Apple does, the more desperate you are to find something, *anything* to hold against them. Most of which is actually meaningless. The latest is the cell-tower logging issue. You do realize that about 90% of tech companies out there would kill to have this be their biggest problem . . .
Score: 2 Votes (Like | Disagree)

TheNewDude
Apple is already behind when it comes to Maps with Google providing full turn-by-turn navigation on Andriod devices. They need to come up with something big and QUICK!

Hopefully whatever that's released in June will have it or at least some of it.
Score: 2 Votes (Like | Disagree)

Good. Apple can make a better software than Google. No doubts; here we go.


If Apple top Google Maps on Android as it is today then hats off to them as Google Maps is fantastic. Im really looking forward to seeing what Apple can do.
Score: 2 Votes (Like | Disagree)

dethmaShine
Good. Apple can make a better software than Google. No doubts; here we go.
Score: 2 Votes (Like | Disagree)
Read All Comments