In August, we profiled a 3D mapping company called C3 Technologies that had been acquired by a mystery buyer. We suspected Apple was the purchaser of the company, but weren't able to prove it at the time. 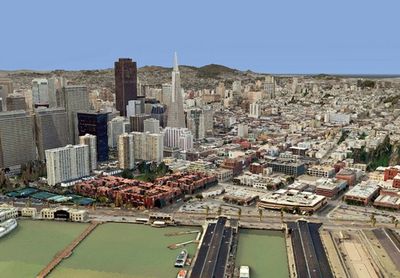 Realtime map screenshot from C3 Technologies
Now, it seems that Apple was indeed the buyer of the company, according to 9to5Mac's sources.

Sure enough, we have now learned Apple is now the owner of C3 Technologies. Sources say that C3 Technologies CEO Mattias Astrom , C3 Technologies CFO Kjell Cederstrand, and lead C3 Technologies Product Manager Ludvig Emgard are now working within Apple’s iOS division. The leading trio, along with most of the former C3 Technologies team, is still working as a team in Sweden (interestingly, the division is now called “Sputnik”), where the C3 Technologies company was located prior to the Apple acquisition.

C3 Technologies made a big splash at CES 2011 when it began demoing its technology on both Android and iOS devices. The company uses formerly classified missile targeting technology to achieve its impressive 3D mapping effects. The company's official YouTube videos have been pulled, but some examples remain. This video shows a flythrough of Oslo, Norway (video improperly labeled):


Another example of New York City with overlays is on YouTube. And here's a demo of the technology running on an early iPad version:
The technology had also been previously licensed by Yell.com and Nokia.

Apple's interest in the technology is obvious. The company has been dependent on Google's mapping technology for their iOS devices, but has been steadily making acquisitions to replace that technology. Apple has been heavily recruiting for their Geo Team and has even revealed in iOS 5 that they are planning their own full mapping solution.

MacSince1990
Something tells me Android support is going to be dropped :D

2012 iPhone best selling point will be the maps and larger screen. The screen will have some kind of 3D capabilities, similar to the Evo 3D, but much better.

So, do we expect, like Google, Apple will make this viewable/usable to everyone with a computer/hand held product, and not just keep it for Apple use only?

This, like a touch screen interface, is the type of thing that no one company should ever be able to own and keep to itself as its potentially of benefit to anyone on the planet, and as such should not be withheld from access by others with different products.

Can you imagine for example if google maps, google street view and google earth had always been banned from running on any apple products and how wrong that would be for google to do this.

And the same should apply to Apple with this.


Apple's and oranges. You can't compare them like that. Google does not sell Android. Apple sells iOS. Google makes money off advertisers, Apple makes money by selling products. So Google canceling the use of their services in Apple products works against Google, not for them. Yet Apple keeping their technologies for themselves works for Apple, not against them. So you can bet that Apple won't give this to anyone else.
Score: 17 Votes (Like | Disagree)

Nice to have a pile of cash to buy emerging 'best of' companies. Woo hoo!!
Score: 16 Votes (Like | Disagree)

gmcalpin
Jeeeeeezus. That is so much more impressive than Google Street View.

My jaw literally dropped a little.
Score: 14 Votes (Like | Disagree)
Read All Comments