Nano-SIM Card Standard to be Decided This Month

Apple has been pushing its own nano-SIM design as a replacement for the current micro-SIM for a year. As of a couple months ago, however, Apple was fighting with rival phone makers who were pushing their own SIM designs. Apple has even offered a royalty-free patent license to its design in order to convince other companies to sign on. 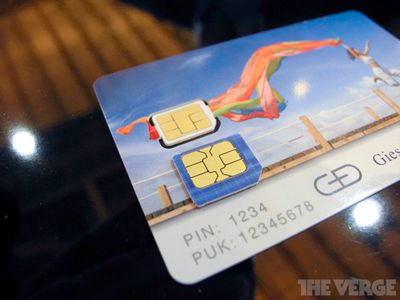 The Verge reports that the votes on the next SIM card standard are finally being taken and should be concluded by mid-May. Apple has attempted to counter Nokia's concerns by slightly reworking its design.

We just spoke with SIM card maker (and pioneer) Giesecke & Devrient here at CTIA about progress on the creation of the 4FF standard — the so-called nano-SIM — over which Apple and Nokia have been warring in recent months.

The company tells us that the ETSI vote on the 4FF standard that had been delayed back in March is actually now underway. Voting began for ETSI members in mid-April and wraps up in mid-May, mere days away. G&D is a voting member, though it wouldn't tell us which way it's leaning — needless to say, the presence of Apple's design here signals that they'll almost certainly put their votes in that direction and away from Nokia's more radical design that limits backward compatibility with micro-SIM and mini-SIM slots on older phones.

G&D also noted that since the nano-SIM design is being "driven by a supplier" -- in this case, Apple -- there wouldn't be a long lag before the new design was implemented. The current standard, the micro-SIM, took five years from ratification as a standard to appearing in the iPhone 4.

Recently, a purported micro-SIM tray for the next iPhone leaked from a part supplier, suggesting that Apple will continue to use that standard in the forthcoming device. Being that the new nano-SIM standard hasn't been ratified, and the fact that Apple would need some lead-time to incorporate the design into the iPhone, it seems likely that the nano-SIM standard would not be ready in time for the next iPhone.

I guess this means good news for a radical design for the 6th generation iPhone?? aka the iPhone 5 :)

Yeah, im gonna take a wild stab in the dark and go with "The New iPhone" hahaha jk :D


Im sorta getting sick of this numbering thing anyway

jlnr
It is frustrating enough to have two SIM card standards co-exist in 2012, why three? This is going to be a PITA for travellers.
Score: 6 Votes (Like | Disagree)

BvizioN
I can't wait for the new iPhone to arrive, so the naming problem can finaly be solved once and forerver.

On the subject tho, could someone please explain what the big deal is with this SIM standards? Is one of them technically superior to the other, they can't be that different from a size aspect that it would matter, SIM's are already like 0,5mm thin or something like that.


ETSI asked for designs for their new 4FF (aka - nano SIM). Apple responded with one design, Nokia, RIM and Motorola responded with a different design.

Apple's design requires a drawer to hold the SIM. 1p piece of plastic (with huge tooling costs) is fine on a £400 handset with £100 profit on each sale which sells in their millions between design changes, but on a £30 handset with £5 profit it becomes more of an issue. Remember Apple used expensive Liquid Metal just to make a SIM eject tool on the 3GS (when a 0.01p pin could have done). Nokia's design claims to allow greater options where the SIM is sited, how it's inserted, and therefore a greater range in form-factors. Once the tray is taken into account, Nokia claims Apple's SIM doesn't offer a significant reduction in size (smaller, but not by enough to justify it).

Apple's design is/was the same width and the micro SIM was wide - meaning users could insert the SIM the wrong way around into existing handsets with the risk of jamming the card in and damaging the phone.

Nokia claim that their SIM would be easier for users to handle, allow for more innovative device designs and provide something very different to just a SIM a little smaller than the current micro SIM.

And finally, ETSI had pre-agreed a number of requirements for the 4FF - i.e. they said "Please submit your designs for our new nano-SIM, it has to do X, Y and Z". Nokia/RIM/Motorola's claims that Apple's design does not meet all the requirements. It's like a customer (ETSI) asking a software developer (Apple) for some software to do some specific things, and the developer coming back and saying "You didn't really want that - have this instead."

justperry
No SIM at all would be the best option, eSim would be by far the best option for those who travel a lot.
I find it a pain in the behind to change Sims, and since they are so small easy to loose.

Instead of buying a new sim you just buy a number, register by sms and your done, as soon as you get into another already registered area/country it automatically registers, no hassle of changing SIM's.
Score: 4 Votes (Like | Disagree)
Read All Comments