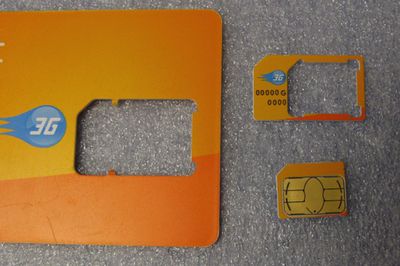 Current micro-SIM (bottom right) punched out of a full-size SIM card (top right)
Reuters reports that Apple has submitted a proposal for a standardized SIM card design smaller than the micro-SIM currently used in the iPhone 4 and iPad, with the new design having apparently won the backing of French carrier Orange. The design would reportedly allow Apple and other companies adopting the card to design smaller and thinner devices.

"We were quite happy to see last week that Apple has submitted a new requirement to (European telecoms standards body) ETSI for a smaller SIM form factor -- smaller than the one that goes in iPhone 4 and iPad," said Anne Bouverot, Orange's head of mobile services.

"They have done that through the standardisation route, through ETSI, with the sponsorship of some major mobile operators, Orange being one of them," she told the Paris leg of the Reuters Global Technology Summit.

With finalization of the standard and technical issues still to be worked out, devices using the smaller SIM card could hit the market next year.

Apple made waves last year with reports that the company was seeking to deploy embedded SIM cards, a step that would remove some of the power of carriers over phone distribution. While the GSM Association and some carriers expressed interest in the idea, threats from other carriers to withhold iPhone subsidies reportedly resulted in Apple backing away from the technology for the time being.

It is unclear whether the newly-proposed standard is related to the embedded SIM technology discussed last year, but it appears to more likely simply be a smaller evolution of the removable SIM cards in use today.


The iPhone was the first real smart phone. This led to Android being developed. I guarantee you that if it wasn't for the iPhone, the Android would be similar to blackberry's


Whoa, let's not state this as a fact or anything. Since the iPhone was not the first real smartphone. When it was first released it didn't even have the ability to load custom applications into the phone.

Give credit where credit is due mate; the IBM Simon came out in 1994 and had a significant amount of functionality that would later be seen in smartphones like the Handspring Treo and RIM's Blackberry line (circa 2002).

Once could argue that the iPhone was the first smartphone to be adopted by the average consumer en masse. It also defined a new form factor that now appears to be the gold standard for many of today's smartphones. </rant>
Score: 7 Votes (Like | Disagree)

Piggie
Must say I agree with most here.... What's the point. :confused:

And when it comes to fitting such a thing into something the size of an iPad it gets even more laughable. Perhaps I'm missing something, but I can't see the point yet.

If they were going to totally redesign the whole thing from scratch and make the whole card and the reader inside/contact points, the size of a match head, then I guess fair enough.

But shaving a bit of plastic off, when the device it's slipping into is MASSIVE in comparison, the reasoning behind it is a bit lost on me I must say.

Especially where there are much more important things to worry about.

I never get that with Apple, they have some fundamental things to sort out, and yet they faff around with things like this.

It's like making a car with poor brakes and keep worrying about the material the seat covers are made from
Score: 5 Votes (Like | Disagree)

Its not an assumption, that's what i got out of the post i read about people's opinions on soft sim card's . If you have an opinion against it, state it so i better understand why.

We're talking about Apple here. The company that:

a) Forces you to gain permission to use a device you've paid for (i.e. activate it) using their servers every time you restore it. If Apple's servers don't work (or they close them down) you can't use your device.
b) Requires you to download an entire 650MB+ file to update the smallest of things - USING A COMPUTER! when other manufacturers have had OTA and small updates for years
c) Requires you to sync with iTunes (I'm not even going to write about how bad iTunes is) to do the tinest of things like adding a ringtone to your phone, when other devices can do it without a computer at all
d) Plays to every whim of the carriers (particularly AT&T), restricting how people use their devices

I don't expect a "soft SIM" approach implemented by Apple to be of any benefit to consumers. The above four things benefit Carriers but not users. I expect(ed) Apple's "Soft SIM" approach to be no different.

I can't perceive how a "Soft SIM" approach implemented even by a saint would be of any benefit to consumers. It simply wouldn't offer them any more flexibility than they already have and it would take conveniences away from them.
Score: 4 Votes (Like | Disagree)

I know we would all rather have soft sim card's but that means it gives apple the chance to make the phones even smaller?


Why do you make that (wrong) assumption?
Score: 4 Votes (Like | Disagree)

Kar98
Apple made waves last year with reports that the company was seeking to deploy embedded SIM cards, a step that would remove some of the power of carriers over phone distribution.

It would have meant the exact opposite.
Score: 4 Votes (Like | Disagree)
Read All Comments