Analyst Speculation Points to 2013 for Launch of Apple Television Set

Wednesday March 28, 2012 12:20 pm PDT by Eric Slivka
Business Insider reports on a new research note from Hong Kong-based research firm CLSA claiming that Apple's much-rumored television set is likely to debut in 2013 rather than the late 2012 timeframe that has been suggested by several other reports. CLSA is also one of a number of analyst firms that believe Foxconn's investment in Sharp is likely tied to potential for an Apple television.

We continue to view Apple TV hardware as a 2013 event.

The timing of Hon Hai/Foxconn's equity stake and partnership with Sharp along with Hon Hai Chairman Terry Gou's separate 46.5% investment in Sharp's Sakai City plant lends further credibility that Apple TV is in the works. This also follows reports that Apple is investing ~$1.3bn in equipment destined for Sharp facilities.

CLSA does not offer a specific rationale for its belief that the Apple television won't debut until next year, but a number of rumors from last year suggested that it could appear in either late 2012 or early 2013. More recent reports have claimed that component suppliers have already begun moving parts for the Apple television, with a launch potentially coming in the fourth quarter of this year. 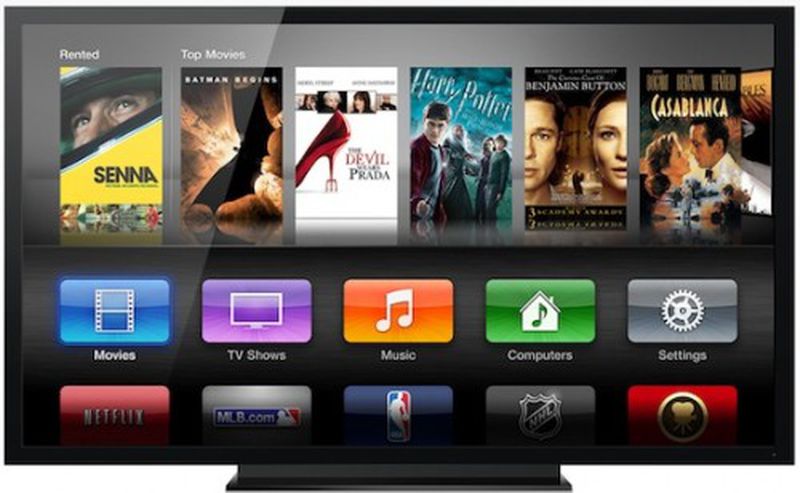 CLSA does not have a particularly prolific track record, but the only previous report we have on record from the firm is an incorrect one from June 2011 claiming that an LTE-equipped iPad would launch ahead of the 2011 holiday season. The new iPad with LTE support of course didn't launch until earlier this month.

That's pretty much what it feels like they are doing.
Rating: 25 Votes

CBJammin103
Being a tech analyst must be like being a weatherman... with earmuffs and a blindfold on... in a room with no windows... underground.
Rating: 9 Votes

Here is what it will be:

Apple realizes that every person in the world needs tv, and when tv sets bring in profit of like 400%, plus the fact that they take 30% off the app's profit, its an easy cash money machine.

As somebody who was in the industry for close to 10years, I still find it hilarious when people say this. It's a well known fact that there is little to no profit in televisions which is why so many people couldn't get their head around why Apple would even CONSIDER getting into the industry since they're used to their 30-40% profit margins. Even Samsung (most likely the largest TV manufacturer) is spinning off their LCD division because of profit losses. If Apple goes the OLED route they may remain competitive for the first 3 months until the rest of the television market starts on the "race to the bottom" that occurs like clock work every year. Televisions have become nothing more then a loss leader. If Apple does it they may need to take the Kindle Fire route and sell the TV's at cost to make money off of services. I'm still of the belief that they'll stick with the Set-Top-Box and this "New Apple TV" that's being rumored will be a new streaming service and not an actual TV set. To me that is far more exciting.
Rating: 6 Votes

Gives them chance to focus the spotlight on that product for 3 years before the next big thing comes along.

So they release a new product after X years from the previous one where X is incremented by 1 each time.

Maybe around 2022 they may release the iPad Mini just to make Digitimes happy.
Rating: 4 Votes

ThunderSkunk
There's nothing to get excited about until they get the studios & the networks unstuck.

Gives them chance to focus the spotlight on that product for 3 years before the next big thing comes along.
Rating: 4 Votes

If this "Apple Television Set" is nothing more than Apple TV integrated into a regular TV with maybe Siri, I'm gonna be majorly disappointed.


iTV will be less about the hardware and software than people think.

Yes, there will be beautiful hardware, and some interesting innovations on the remote interaction. But it'll primarily be about change in content delivery.

The concept of channels will disappear.

You will specifically search for & subscribe to the smallest common denominator: The shows themselves.

iTV will be as much about how apple manages to get content licensing deals as it is about getting out a new sexy hardware. The whole ecosystem needs to evolve for the hardware to be anything more than a giant Apple Cinema display with an Apple TV integrated inside it.
Rating: 3 Votes

I agree with you. It seems like this is one market that would be very challenging for Apple to take on unless, of course, they have some major plans for how they plan to revolutionize the way we watch TV. They proved themselves with the iPod and iPhone, two markets that were saturated with an endless amount of options, so who's not to say they can't or won't change how we see TV in the near future. But, if an Apple-branded display with Apple TV software is all they have to offer, I think it'd be wiser for them to license out their Apple TV & AirPlay to existing manufacturers.


Some argue that Apple only plays in the premium market. While this is true for all of their products, I'm not entirely sure whether there's a premium market for televisions.

Anyway. As you've said, Apple has to revolutionize the way we watch content on our TV's. A great display won't suffice.
Rating: 2 Votes