ITV Warns Apple (Again) Not to Use Their Name [Updated]

Amidst the growing chorus of rumors about an Apple branded television, The Telegraph reports that the UK TV network ITV has written a letter to Apple to warn it against using the name "iTV" for its future television product.

This is actually not the first time that Apple and ITV have been in contention over the name. When Apple first announced their set top box in 2006, they originally called the product "iTV": 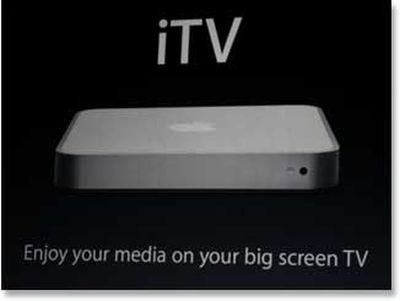 The original name for the Apple TV set top box
Apple later changed the name to "Apple TV", but reportedly later reconsidered changing the name back to iTV. ITV executives were said to be "furious" over the possibility.

The Telegraph reports that Apple gave reassurances back in 2010 that they would not use the name, though they note that Apple is now under different leadership.

However, insiders fear that the world’s biggest company might take a different stance under Tim Cook, who replaced Steve Jobs as chief executive shortly before Mr Jobs died in August last year.

Apple is believed to be actively working on a standalone television product. A recent report claimed Canadian cable companies already had the product in their hands. That report and others have been casually referring to the upcoming product as the "Apple iTV", though Apple has yet to officially name or even acknowledge the project.

Update: In a statement to The Verge, ITV has denied that it sent any such warning to Apple.

In a statement to The Verge, ITV said that, "The Telegraph's piece is entirely speculative, and there has been no communication between ITV and Apple. ITV has no further comment on the matter."

hollerz
Or they could just continue using Apple TV. The i moniker is getting a bit old now anyway, every company is using it!
Score: 39 Votes (Like | Disagree)

I guess Apple could just buy the name if they wanted it.:confused:

Could ITV stand in their way..? Or will Apple's Billions just trump them.


Its like saying Apple should buy NBC. And do what with it. Use the name?

Its not about money. The thing apple will announce will NOT be called the iTV.
Score: 37 Votes (Like | Disagree)

Dr McKay
Now comes the flood of angry people insisting that Apple deserves the name more than ITV because they like Apple better.

There has already been the usual flood of "Apple should just buy...." :rolleyes:
Score: 28 Votes (Like | Disagree)

buckers
It would be a bit weird in the UK. ITV is a household name, like BBC and CNN. There probably would be some confusion.
Score: 28 Votes (Like | Disagree)

I have said before, it didn't stop them using iPhone and iOS, two Cisco trademarks. Cisco are many times the size of ITV. (Before they came to the legal agreement)

Granted, iPhone wasn't really a known product and Cisco IOS isn't on consumer devices, most regular people who never hear about it.

Whereas ITV is a name people recognise in the UK, it being like, the second biggest broadcaster (I'm not entirely sure) after the BBC. With the UK being a large market for Apple they may choose to stay away from the name or just perhaps have a different name for it in the UK?

Unlike Cisco and the iPhone name which was used on a little known and obsolete product, ITV is the name of the company. You can't seriously expect ITV to give it up their brand name after using it for the last 50 years?
Score: 24 Votes (Like | Disagree)

This may be a stupid question but aren't the names, "ITV" and "Apple ITV" different. Could apple just use the second name and not get in trouble?