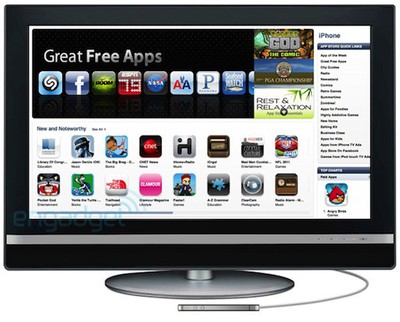 Engadget mockup of iPhone 4-style "iTV" device serving App Store content
Engadget provides a follow-up to its late May report revealing Apple's plans for a revamped Apple TV product. The previous report had suggested an iOS-based device at a price point of $99 with limited onboard storage that would be capable of 1080p playback, but today's report claims that some things have changed in Apple's plans.

Well we've gotten a little more info on the project, and it's not all good. Apparently the box won't be capable of handling (or enabled to handle) 1080i or 1080p video. Instead it will only push out 720p clips. The word -- and cause for much internal debate, we're told -- is that this has something to do with the A4's inability to crank on higher resolution content, but we don't see how that's possible considering the iPhone 3GS could play back full HD video. Furthermore, the device will be getting apps and presumably an App Store entry, though it's unclear if there will be cross-pollination between iPad and iPhone / iPod touch offerings and new Apple TV applications.

Also of significance, Apple is reportedly renaming the Apple TV to "iTV". Apple initially announced its set-top box product as "iTV" in September 2006, but changed the name to "Apple TV" for its launch in January 2007. Coming full circle, Engadget expects the new iTV to make its debut sometime later this year.

Thursday May 13, 2021 12:10 am PDT by Sami Fathi
Apple has fired Antonio García Martínez, an ex-Facebook product manager and author of the controversial book "Chaos Monkeys," following public and internal calls for removal and investigation due to past misogynistic statements, The Verge reports. Apple hired Martínez earlier this week to join its ads team, however, comments that Martínez made in the past sparked condemnation from users...
Read Full Article • 332 comments

Friday May 14, 2021 11:52 am PDT by Juli Clover
Following the discontinuation of the iMac Pro, Apple also appears to be discontinuing Space Gray "Magic" accessories that it sold separately alongside the iMac Pro. The iMac Pro was the only Space Gray Mac, and Apple designed special matching accessories for it. The Space Gray Magic Mouse 2, Magic Keyboard, and Magic Trackpad all now say "While supplies last" in small wording at the bottom...
Read Full Article • 329 comments

Saturday May 15, 2021 11:08 am PDT by Juli Clover
Twitter has been working on some kind of subscription service since last summer, and Jane Manchun Wong, who often digs into new features coming in apps, has shared details on just what Twitter is exploring. Twitter's subscription service could be called Twitter Blue, and at the current time, it's priced at $2.99 per month. There will be a "Collections" section that allows users to save and...
Read Full Article • 106 comments