MacRumors reader Tony Hart notes on his blog that after emailing Apple CEO Tim Cook with his thoughts on the company's selection of Dixons CEO John Browett as the next head of retail, he received a personal response in which Cook noted that Browett was "the best by far" among the candidates he talked with about the position.

I talked to many people and John was the best by far. I think you will be as pleased as I am. His role isn't to bring Dixons to Apple, [it's] to bring Apple to an even higher level of customer service and satisfaction.

The selection of Browett has raised some concerns among those familiar with Dixons, which operates stores under a number of names including Currys and PC World, as the retailer does not have particularly good reputation in the UK. Browett has, however, been considered by some to be a rising star in retail after serving time leading operations at supermarket chain Tesco and then taking the reins at Dixons in 2007. Apple had also been expected to look internationally for its next retail chief as the company focuses its expansion plans on locations outside of the United States. 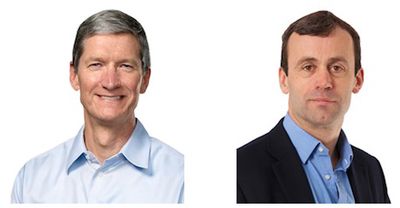 While Steve Jobs was known for occasionally responding to customer emails, usually with tersely-worded replies, Cook seems to have carried on that tradition even as he has moved to put his own stamp on Apple. A number of Cook's emails to the Apple team have made their way out of the company's offices, and he has on occasion, as in this case, replied to customer emails as well.

Did he only interview one person?


The other candidates were probably the CEOs of Poundland and Lidl.
Score: 19 Votes (Like | Disagree)

I talked to many people and John was the best by far.


Did he only interview one person?
Score: 9 Votes (Like | Disagree)

I am myself a UK consumer and also former employee of DSG (this doesn't mean I like them, as I dont). I completely agree with your statement regarding DSGs reputation for poor customer service - I witnessed some pretty bad stuff whilst I worked there - but this is not a reflection on John. I was working at DSG when John joined the company and then continued to work there for a number of years after so got the chance to witness some of the changes he implemented. John was a cut-throat CEO, he sacked/demoted numerous store managers after store visits that he didn't deem to be up to scratch, he closed and restructured departments to make them more efficient - he also implemented a company wide redevelopment of all the stores which if you have ever visited a new store you have to agree they are a great improvement.

The problem with DSG is that poor customer service has been at the heart of the company for years (well before John joined the company). John implemented so many changes to try and change this and on so many levels he has succeeded. DSG has come out of the financial downturn in a far better position than any of its competitors. Apple on the other hand have never had a problem with poor customers services, mainly due to the nature in which Steve Jobs developed the Apple Retail Store model - so it does have a problem to solve.

DSG biggest issue is the people it employees - which are normally a bunch of uninspired, unmotivated morons. Pretty much the complete opposite to the kind of people employed in Apple Retail Stores.

I find it really strange that so many UK consumers have been quick to make unfounded comments and statements about John's appointment at Apple and some how automatically attribute DSGs bad reputation to John - when truthfully John should be attributed with initiating a process of redeveloping the entire company to try and get rid of this reputation.

I just thought I would share my views as they seem to be vastly different to everyone else's. John Browett was a fantastic CEO at DSG and I think he will continue to be fantastic at Apple.
Score: 5 Votes (Like | Disagree)

As for how far removed I was from his position? Pretty far removed as I worked in store but I was easily able to see the changes he implemented.


The store revamps were impressive, but have nothing to do with employees providing good customer service.

Selling the insurance policies was big money for DSG, and as a result, their employees were forced to throw it down every customer's throat. There was bonuses for selling the most insurance policies. It didn't matter if you sold the customer the crappest TV in the world, as long as you sold them the 5 year policy, you would be salesman of the week.

Employees were told to only serve customers who were actually going to buy something. Customers just browsing were a waste of time.

Having worked at John Lewis and Currys, the cultural difference between the two is incredible. John Lewis was all about the professional service - if the customer doesn't want to buy it today, make sure you give them the best service possible, and they'll come back. Currys was the complete opposite, force the customer into buying it today.

I worked at John Lewis first for 2 years before working at Currys for a while. I've lost count the number of times I was told off for selling things the "John Lewis way" - which was basically being honest to customers (such as, that TV might cost more, but this cheaper one is actually just as good, all you're doing with that one is paying for the brand).

Customers weren't allowed to just browse either - if you saw a customer, you had to go up and try and instigate a sale. The fact that you had to instigate a sale was the thing that pissed me off most. If the customer wants to buy it, they'll buy it. If they don't, they won't. I hate going into a store to browse and suddenly being pressured to buy something by sales staff.

That is how the DSG stores operate, and how they still do. John Browett changed nothing in terms of customer service and satisfaction. Which is the reason Tim Cook appointed him - so him "saving Dixons from the economic crisis" is kind of irrelevant here.
Score: 4 Votes (Like | Disagree)

Padraig
I still find this appointment completely baffling given my experience of Dixons group. It's like this guy has failed upwards:confused:
Score: 4 Votes (Like | Disagree)

Did he only interview one person?


Quote from Tim Cook -"[it's] to bring Apple to an even higher level of customer service and satisfaction."

It's never going to happen if the level of service he's been used to is Dixon's, Curry's and Tesco. He would have no idea of what good service or customer satisfaction would be. If he was the best by far, then I would keep looking. Very poor, Tim. :(
Score: 4 Votes (Like | Disagree)
Read All Comments