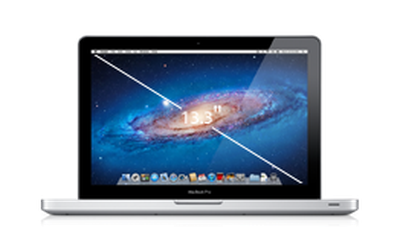 AnandTech reports that Intel has announced that its next-generation processor code-named Ivy Bridge will offer lower-power quad-core chips than the current generation of Sandy Bridge chips. In particular, Intel has revealed that it will introduce a 35-watt quad-core Core i7 processor.

Next year Ivy Bridge will expand the range to include a 35W quad-core Core i7 SKU. Shaving off 10W off the TDP should enable somewhat smaller notebooks to enjoy the benefits of a quad-core CPU.

As AnandTech notes, this development means that Apple could offer quad-core processors in its smallest 13" MacBook Pros.

This news of lower power targets for Intel's mobile processors should come as no surprise, as Intel has admitted that it has been slow to respond to the low-power trends and has redoubled its efforts to lower the power requirements of its future CPUs. Apple may even have helped prompt the shift by threatening Intel with the potential loss of Apple's business.

While fitting a quad-core processor into the current 13" MacBook Pro will be possible with the new CPUs, Apple may take a different approach. We've long heard that Apple will be introducing a new case design for the next MacBook Pro, with many expecting it to take on thinner, more MacBook Air-like design. While Apple may choose to slim down the MacBook Pro by making the optical drive an external option and moving toward integrated solid-state storage, the company may also opt to utilize processors with lower heat requirements to design a thinner/sleeker machine rather than simply trying to boost the raw power of its low-end model.

I'm fine with my c2d for now

Broadwell/haswell will be fantastic :D

dagamer34
Thing is, the current chassis was designed for 35W CPUs 3 years ago, and boy can you feel it.
Score: 3 Votes (Like | Disagree)

A 13" MBP with a quad core and dedicated graphics without a DVD drive please! That would be a brilliant machine, I know it won't happen though!

I heard the 2015 Macbook Pros will be awesome. :eek::rolleyes:


Not as good as the late-2016 MacBook Pros
Score: 2 Votes (Like | Disagree)
Read All Comments