iPhone 5 with Metal Chassis and Less Than 4" Screen?

Digitimes offers a bit of a strange report this morning that just seems to reinforce some details that have been previously reported about the iPhone 5.

The strangest bit, however, is that their report attempts to refute a fake "leak" video that circulated on YouTube earlier this month.

Despite rumors about iPhone 5 featuring a 4.2-inch panel circulating within the IT market for a while, following a leak from Apple's website in Switzerland in early August

The referenced "leak" video was a clear fake. They seem to have taken the video seriously, but at the least they refute the details of the leak citing "upstream panel suppliers."

Instead, their sources indicate the iPhone 5 will include a 3.5 to 3.7-inch panel "with a design to allow the bezel of the panel to become thinner and make the screen look larger." They also report that the glass back of the current iPhone 4 will be changed to a "metal chassis". 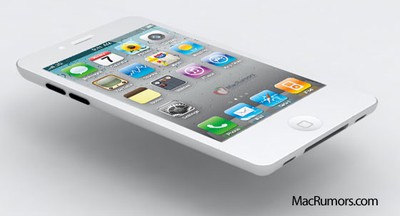 iPhone 5 artist rendition with 3.7" screen and circular home button
Despite the confused nature of the report, these details come at an interesting time, as the vision of the iPhone 5 has become increasing confused.

Last week, we saw a number of part leaks for a device that looks just like the iPhone 4, but carrying an upgraded A5 processor. That device carried an internal name of 'N94' which was previously believed to be the iPhone 5. Over the last few months, multiple conflicting sources have described the iPhone 5 as both thinner and lighter as well as largely identical to the iPhone 4. The "largely identical" report came from Reuters who did say that the new device would have a "bigger touch screen".

The only concrete design that we've seen is one of a leaked design spec but we've not yet seen any related parts leak out into the supply system.

karlth
Anything smaller than a 13" screen on the iPhone will be a disappointment.

I want people to cower in fear when I answer the phone.
Score: 26 Votes (Like | Disagree)

Can we just get a date for the event


Look, MacRumors is exactly that, a rumors site. It is not an escort service. You are going to have to find your own date. There must be someone at work you can ask. Good luck.
Score: 24 Votes (Like | Disagree)


i agree, even iOS looks dated and getting boring. they can change the hardware as much as they want, the OS is still gonna be boring after having owned 3 generations


Yep let's change things for the sake of change. When people talk this nonsense, makes it clear they have no idea what they are talking about.
Score: 13 Votes (Like | Disagree)

montycat
I hope it has the bigger screen.
Score: 12 Votes (Like | Disagree)

i agree, even iOS looks dated and getting boring. they can change the hardware as much as they want, the OS is still gonna be boring after having owned 3 generations


And each generation got better & better, kinda like the evolution of MacOS which has been around for 10 years. Or Windows XP, we had that for 10+ years. Not sure what it is you're wanting. A brand new OS isn't something a company like Apple (or any other) can pop out every 3 years or so.

Perhaps what you need is to use another mobile OS for a while (Android comes to mind). That should make you appreciate your boring ole iOS.
Score: 10 Votes (Like | Disagree)

kyjaotkb
looks like Apple is better at blurring the rumors related to the future iPhone... this time...
Score: 9 Votes (Like | Disagree)
Read All Comments

Tuesday May 4, 2021 9:51 am PDT by Juli Clover
Just after Apple announced its AirTags, Tile CEO CJ Prober relayed his concerns about competing with Apple in the tracking space, and said that Tile would ask Congress to investigate Apple's business practices specific to Find My and item trackers. Prober this week did an interview with Bloomberg, where he further expanded on Tile's complaints about Apple and why he feels that Tile is...
Read Full Article • 432 comments