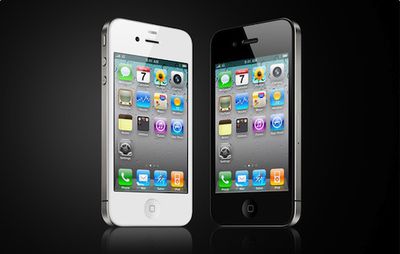 Earlier this week, Norwegian site Mobili.no reported [Google translation] that it had received information claiming that the white iPhone 4 will debut on Wednesday, April 27th.

It will be distributed in both Telenor's and NetCom's stores.

That claim is now being repeated [Google translation] by Dutch site iPhoneclub.nl, which claims to have confirmed with multiple employees of mobile phone retailer BelCompany that an internal memo has been circulated announcing the launch date.

We received this information through an anonymous tip from someone who works BelCompany. Then we started looking for other people who BelCompany works that could confirm the information. That was the case: they indicate that an internal memo was circulated, indicating the date of April 27 for the white iphone called April.

Bloomberg reported earlier this month that the white iPhone 4 is set to launch by the end of the month, giving Apple just over a week to meet that timeline. Over the weekend, Italian site iPhone Italia claimed that the device will launch on Tuesday the 26th. The next day, a listing appeared on UK carrier Three's website mentioning delivery for April 20th, although that date has since passed with no announcement regarding the white iPhone 4. Next Tuesday and Wednesday are of course among the most popular targets for release date speculation given Apple's tendency to announce and/or release new products on those days of the week.

Apple has said several times over the past six months, most recently just over a week ago, that it plans to launch the white iPhone 4 in the "spring" after several delays reportedly due to issues with the white paint used on the device. Some observers had speculated that Apple might cancel the device entirely given an expected launch of the fifth-generation iPhone just a few months down the road, but it increasingly appears that Apple will not be introducing the fifth-generation iPhone until the September timeframe.

Lesser Evets
This thing is like Bigfoot: every claims it's out there somewhere, but we never see proof.
Score: 2 Votes (Like | Disagree)

gglockner
Didn't the last rumor say this was supposed to happen this week? It's a nice-to-have feature, but anyone who has been holding off on an upgrade simply because the white phone wasn't available is vain or foolish.
Score: 0 Votes (Like | Disagree)

Full of Win
I think this is just for Apple to not have to admit defeat.
Score: -4 Votes (Like | Disagree)
Read All Comments