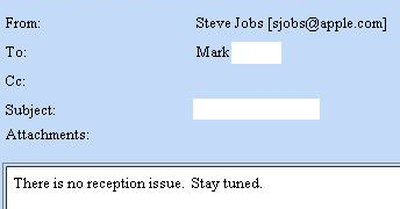 One MacRumors reader emailed Steve Jobs in a followup about the widely publicized iPhone 4 signal issues that have been reported across the web. In particular, rfbandit was asking about Apple's policy on giving free bumper cases to alleviate the issue. "I love everything about the phone except my signal issues", he wrote.

There are no reception issues. Stay Tuned.

The response is notable in that it is not simply a copy/paste of the official statement from Apple. Steve Jobs had previously been replying to all signal inquiries on Friday with the same generic statement published Thursday:

Gripping any phone will result in some attenuation of its antenna performance, with certain places being worse than others depending on the placement of the antennas. This is a fact of life for every wireless phone. If you ever experience this on your iPhone 4, avoid gripping it in the lower left corner in a way that covers both sides of the black strip in the metal band, or simply use one of many available cases.

That public statement from Apple essentially described the issue as a normal phenomenon. Today's email provides users some hope that a fix might somehow be on the way. In fact, one report even claimed an iOS update as early as Monday might be able to relieve the issue due to a lag in the iPhone 4's ability to switch between frequencies causing the loss in signal.