iPad Competitors Begin to Disappear Even Before Being Released [Updated] 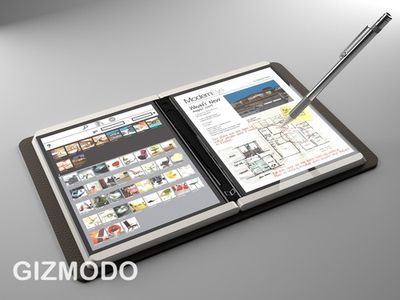 Microsoft's "Courier" booklet-style tablet concept
Silicon Alley Insider yesterday noted that HP appears to be putting its "slate" tablet computer on hold as it looks to complete its acquisition of Palm. The move appears to be related to HP needing to make decisions about how exactly it will integrate Palm's webOS smartphone operating system into its product roadmap.

An analyst asked what HP would be doing with its iPad-rival. HP's Todd Bradley responded, "We haven't made roadmap announcements," but that HP will explain its Slate plans in more detail when the Palm deal closes.

That's at least a few months away: HP expects the deal to close during its fiscal third quarter, which ends at the end of July. And building Palm's WebOS operating system into HP tablets could take much longer -- perhaps even a year or more.

HP's slate, previously destined to use Microsoft Windows, was demoed by Microsoft CEO Steve Ballmer in early January, several weeks before Apple introduced the iPad. The following month, HP indicated that it was refining the final specs of the slate in response to the iPad and looking to price it competitively with Apple's tablet device.

Today, Gizmodo reports that Microsoft has cancelled its own "Courier" booklet-style tablet device.

We're told that on Wednesday, Microsoft execs informed the internal team that had been working on the tablet device that the project would no longer be supported. Courier had never been publicly announced or acknowledged as a Microsoft product.

The cancellation was confirmed in a response from a Microsoft representative, who noted that Courier was one of the company's creative explorations of new form factors and interfaces, but that it is not planned to go into production. The Courier concept offered two touch-sensitive screens in a foldable format and incorporated touch, stylus, and handwriting recognition input.

Update: TechCrunch confirms that HP is killing off its Windows 7-based slate project and even considering abandoning the Intel-based hardware for it due to excessive power requirements. Consequently, HP looks to be pursuing Google's Android and Chrome operating systems for its own tablets, as well as moving to convert webOS to a tablet operating system.

The iPad is so far ahead of what was displayed by Steve Ballmer that they knew they had to rethink the device.

Yes. We're constantly reading about all the shortcomings of the iPad, which make it mostly useful for consumption, not producing real work. But the great thing about it is that Apple got the big things exactly right. Great screen quality, battery life, the iPhoneOS and form factor, all at an affordable price point. This makes it infinitely better than a netbook or laptop for just looking at stuff. HP's slate was just going to be another overpriced netbook or maybe a clumsier laptop.
Score: 1 Votes (Like | Disagree)

iSee
Ouch! They saw the IPad and just gave up.
Score: 1 Votes (Like | Disagree)

carmenodie
HP can take Palm and ram it where the sun don't shine!
HP isn't even capable of making a decent calculator anymore. Their graphing calcs are the same, antiquated drivel they had 21 years ago but in a cheaper case. I bought a 48g from J and R music world for $150.00. What a waste of money. Plastic, flimsy, junk!!! Horrible navigation. After all these years you'd think they'd toss in a beautiful UI etc. Nope! They don't care.
I bought the HP smart calc. GARBAGE BEYOND GARBAGE!!!!
HP doesn't give a d***!!
Bought a 33 s 4 years ago and the effing decal for the number 4 came off after 2 months!!
OMFG!!!!
Look, Apple has their own OS for Mac and iphone and a bevy of engineers under one roof to collaborate on projects. THEY ARE ALWAYS ON THE SAME PAGE!
HP has spent years living off of another company's OS. HP can't do anything to windows. All HP does is shove windows into a pc and slap their name on it. That ain't nothing!!!! I know a crack w**** that can do that.
HP can only hire a young, hip ad agency to take their license, off the shelf crap and spruce it up with a bunch of generation X, skinny jeans sag wearing tweens grinning and shmucking into the camera with a Justine Bieber(EWWWW!!!) soundtrack blaring.

So, there is no way that tired ink seller will be able to outdo the ipad. Apple has already sold a million so far. A FREAKING MILLION in less than a month.
Score: 1 Votes (Like | Disagree)

Should I get in line tomorrow for an HP Slate? Or a Microsoft Courier? Or maybe a JooJoo Pad? Nah, that Kindle 2.5 update looks rad maybe I'll do that. Facebook in black & white. Sooo retro its cool. Or is it?

Look competition is good, but where is it? Every since the iPad was release its detractors told us a million + one ways it sucks, it would fail, and it was a complete joke. It that is the case why are all the potential competitors either dropping like flies or quickly becoming "also rans"?

Yeah, yeah, Android. I'm still waiting to see a competitive android tablet. That will be a good day. I think its fair to say that Android helped to give us some of the functionality we are seeing in OS 4 and the iPhone 4G.
Score: 1 Votes (Like | Disagree)

"Microsoft execs informed the internal team that had been working on the tablet device that the project would no longer be supported."

Monday December 5, 2022 11:44 am PST by Juli Clover
Due to production issues at Apple supplier factories in China, the iPhone 14 Pro and iPhone 14 Pro Max are backordered and basically out of stock at every store. If you were planning to gift or receive an iPhone 14 Pro model for the holidays and didn't already get one, you're basically out of luck because they're gone until late December. Subscribe to the MacRumors YouTube channel for more ...
Read Full Article • 165 comments