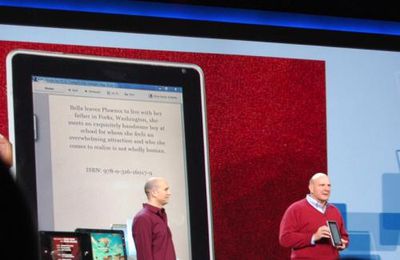 Steve Ballmer Demoing HP Slate-Style PC
After some technical difficulties resulted in delays kicking things off, Microsoft CEO Steve Ballmer this evening is currently giving the opening keynote for the CES conference in Las Vegas. After word surfaced that Ballmer would be introducing a slate-style tablet device tonight, many Apple watchers have been interested to see how Microsoft's offering might compare to Apple's tablet reportedly due for introduction later this month. Speculation had suggested that Ballmer might be introducing a tablet device from its "Courier" development program, but later reports tempered those expectations.

Just as Ballmer took the stage this evening, Microsoft prematurely posted a press release covering the highlights of Ballmer's presentation, and in highlighting the impact of Microsoft's Windows 7 release, the report notes Ballmer's demonstration of three new computer systems, including a brief mention of a slate-style PC from HP.

- A new touch-enabled slate PC from HP
- The Sony VAIO L all-in-one laptop built for HD entertainment and multimedia content creation, and including a 24-inch touchscreen
- The Lenovo A300, one of the thinnest PCs yet at just 18mm, but with a 21.5-inch HD widescreen LED display

Ballmer's introduction of slate-style tablet devices briefly highlighted three examples from Pegatron, Archos, and HP. In focusing on the HP slate, Ballmer offered an example of the device running a Kindle application and noted only that the product will be coming later this year, with no pricing information given. HP has also posted a brief video teaser for the forthcoming device.