With another Tuesday right around the corner, the MacBook Pro update rumor mill is grinding away again, and this time it's a claim from our forums that Best Buy's internal inventory system has been updated with three new Apple products in the "Mobile Computing" category. Speculation on the identity of the new products ranges from updated MacBook Pro models to forthcoming Wi-Fi-only iPad models due for release late next month. 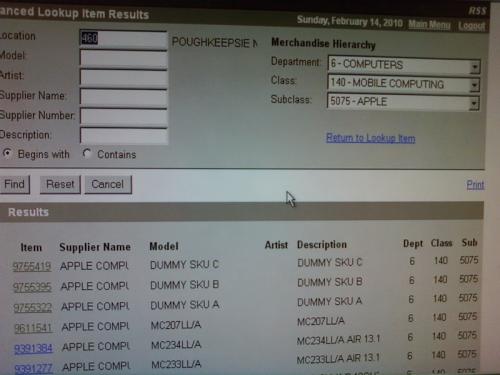 Excitement reached a peak last week when whispers we had heard about a MacBook Pro update possibly coming last Tuesday were followed by a report showing Apple's current MacBook Pro models to be "deleted" from Best Buy's database, later revealed to be a mistaken interpretation of the information. Observers were optimistic when Apple's online store went down for updates last Tuesday morning, but many were disappointed when Aperture 3 was the only new addition made during the downtime.

We have been told in the past that Best Buy rarely has specific advance notice of forthcoming Apple releases, making its inventory system an unreliable source of information as the company frequently uses its own speculation in adding placeholders for expected new products as it prepares to accommodate them. One notable case last year resulted, however, in an unidentified "Mobile Computing" product appearing in Best Buy's database carrying a model number that turned out to be an updated MacBook that was announced two days later.