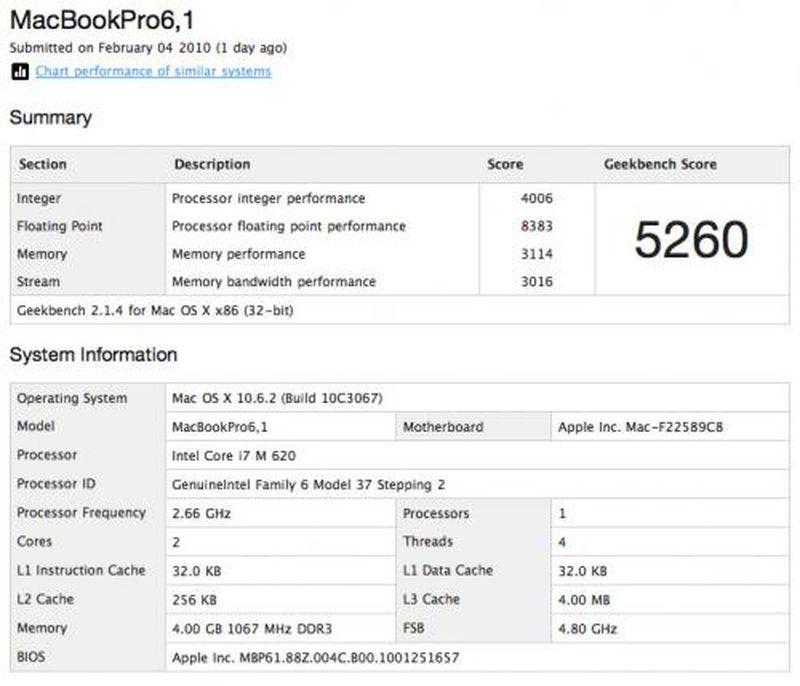 A Geekbench result posted to their site on February 4th has generated a lot of excitement in our forums. The report seems to reveal the results for an unreleased Arrandale MacBook Pro running at 2.66GHz. Intel officially unveiled the new latest mobile chips at CES 2010 and Apple has been widely expected to use them in their next MacBook Pro revisions.

The MacBook Pro gives a "6,1" model designation and a non-shipping build of Mac OS X 10.6.2 (Build 10C3067). The 6,1 designation has been spotted before in recent builds of Mac OS X 10.6.2. The later build number is also consistent with the kind of interim builds Apple provides with brand new hardware.

The processor is listed as an Intel Core i7 M 620 running at 2.66GHz. The final benchmark score of 5260 compares favorably to identically clocked (2.66GHz) shipping MacBook Pros (3700-4000). The Core i7 M 620 is a high end dual core processor with Turbo Boost and Hyperthreading.


Haha you tricked me!
Rating: 1 Votes

Sneakz
This is real bro. Unless someone is going out of their way to spoof CPUID etc.
Rating: 1 Votes

I wouldn't want an i7 in my MacBook; currently they only work when tethered to a power outlet, unless you're fine with a 1 hour battery life. (e.g. there is no mobile version of the i7 yet)


Mobile i7s are out since September 2009. :rolleyes: There was even a second revision in early January.
Rating: 1 Votes

Okay, I'll bite: what is the MacBook Pro 6,1? Is that the currently shipping model? Or is this a sneak peek at some new version?


6,1 (and 6,2) are the semi-confirmed successors to the current laptop line. This is the first time we've seen actual stats of the laptop(s).

Judging by the fact it's got an i7, I assume that 6,1 is a 17" or comparatively larger sized of the laptop family.
Rating: 1 Votes