'It's Only Rock and Roll' Rumor Roundup

With Apple's "It's Only Rock and Roll" media event scheduled for tomorrow, months of rumors and speculation are coming together to generate a picture of what may be in store for the event.

A report from mid-May was the first to suggest that the iPod touch and iPod nano would see the addition of digital cameras. Additional confirmation and mockup images of the next-generation iPod nano appeared shortly thereafter, and the new iPod nano is also rumored to carry a wider-aspect (1.5:1) screen ratio.

Over the past several months, a number of third-party case manufacturers have been advertising cases for the next-generation iPod touch and iPod nano designed to accommodate digital cameras on both models, as well as the new iPod nano screen size. Believable images claiming to be a prototype of the new iPod touch were also revealed last month: 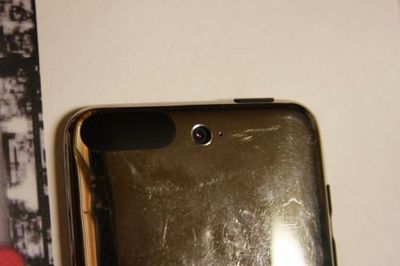 Additional word appeared late last month that Apple has contracted for 3.2-megapixel cameras for not only the iPod touch and iPod nano, but also the iPod classic. Finally, iPod resellers have also reported dwindling stocks of existing iPod models and discontinuation of product codes for those models.

Last minute reports from multiple sources claim, however, that Apple has run into production problems with the cameras on the new models. While the issue may delay shipment of the new iPods, an introduction remains very likely for tomorrow's event.

Another report last week also claimed that Apple has secured the necessary rights to distribute pre-cut ringtones via the iTunes Store as an alternative to the custom-designed ringtones currently available for many tracks in the store.

A report from early last month suggested that iTunes 9, likely to be introduced at tomorrow's event, will offer support for Blu-ray media, as well the ability to organize iPhone and iPod touch applications within iTunes. Claims of social media integration also surfaced, along with several groups of questionable screenshots.

- Beatles: While numerous observers have pointed to several Beatles-related product introductions tomorrow as something possibly more than a coincidence, AllThingsD reports that there will be no Beatles-iTunes announcements tomorrow.

- Tablet: Apple's much-rumored tablet computer has been the subject of significant attention in recent months, with Apple CEO Steve Jobs reportedly focusing nearly all of his attention on the project since his return from a medical leave of absence in late June. Despite some suggestion that the tablet could see an introduction as early as this month, the vast majority of reports claim that it will not be introduced until a later date, likely early in 2010.

- Apple TV: A recent slip in shipping times for the low-end Apple TV has led to speculation that an update to the device could be in store, but sources have indicated that no such announcement will be made at tomorrow's event.