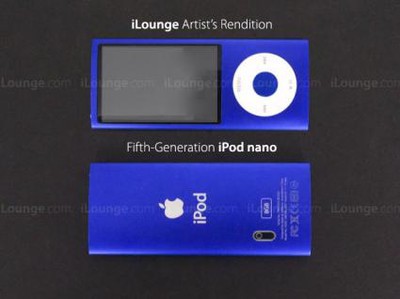 iLounge posts an artist rendition of what it believes the next-generation iPod nano will look like. According to the site, the new iPod nano will see a wider screen (1:5:1 ratio), smaller click wheel, and built-in camera.

Finally, theres a camera on the back in an unusual location, one which conceivably might be blocked by hands except when the iPod nano is corner-gripped for photography. It will debut at the same time as the new iPod touch, between July and September. Our gut feeling is September.

The report seems to confirm a recent claim from HardMac that the new iPod Nano will contain a camera. Of interest, HardMac also said in the same report that the next iPod Touch would also include a camera. Both models are expected to be refreshed around September of this year.

iLounge has been accurate in the past with their artist renditions.