Boy Genius Report provides additional information on the rumored updates to iTunes 9 initially reported over the weekend, which included the addition of Blu-ray support and the ability to organize iPhone applications, as well as some form of social networking integration.

- The application will allow you to broadcast what music you're currently listening to, allow you to share your music with people on your network, connect with your friend's friends (no clue on that one), and update all of your statuses at the same time. ITunes 9 will let you broadcast music statuses as well.

Update: Tobias Bischoff claims [Google translation] to have grabbed several iTunes 9 screenshots from the forums at Chinese site WeiPhone. While the authenticity of the screenshots is unknown and they do not demonstrate the functionality of the new features, they are included here for discussion. 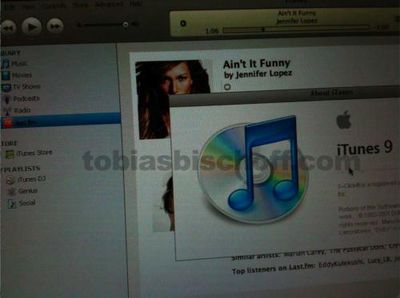 Friday December 2, 2022 10:54 am PST by Juli Clover
Google is continuing on with its attempt to convince Apple to adopt the RCS messaging standard, publishing a new "it's time for RCS" blog post. Promoted heavily by Google, RCS or Rich Communication Services is a messaging standard that is designed to replace the current SMS messaging standard. It provides support for higher resolution photos and videos, audio messages, and bigger file sizes, ...
Read Full Article • 559 comments