Review: Twelve South's Forté is a Versatile Apple-Approved Stand for the Apple Watch

Twelve South was one of the first companies to come out with an Apple Watch stand, announcing its HiRise for Apple Watch before the wrist-worn device even launched, but with watchOS 2, Apple introduced Nightstand mode, a function that required the Apple Watch to be placed in landscape mode on its side.

The HiRise isn't designed to be used in landscape mode, so as a result, Twelve South has come out with a second Apple Watch stand, the Forté. The Forté works in both portrait and landscape mode, so it's able to be used with Nightstand mode. Twelve South also worked with Apple on this design, so the Forté is one of only a handful of Apple Watch stands available in Apple retail stores. 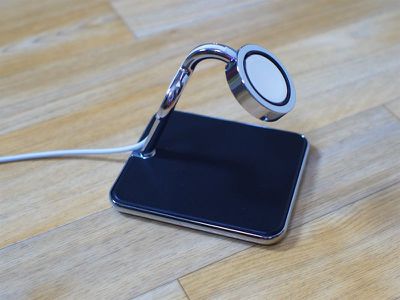 When it comes to design, the Forté doesn't look very different from the dozens of other Apple Watch stands on the market, but it does boast high quality materials and a shape that's both versatile and attractive. It consists of a leather-covered weighted chrome base and a chrome arm that holds the Apple Watch charger.

The base is larger than the base of the HiRise, but it has the benefit of being a suitable spot to rest an open-loop band on. When an Apple Watch isn't on the Forté, or when it's used with a closed-loop band, it's the perfect size to hold an iPhone. On desks with little space, it's a nice little charging platform for both an Apple Watch and an iPhone. On the bottom, there's a silicone pad for some extra grip on a desktop or night stand surface.

Unfortunately, the Forté only comes in chrome with a black leather base, so it's not going to match well with all Apple Watch models, namely the Gold and Rose Gold Apple Watch Sport.

As with most Apple Watch stands, you're going to need to supply your own Apple Watch cable. There's only one stand on the market right now that has a built-in Apple Watch charging puck, and that stand comes from Belkin. We'll likely see more of those in the future, but for now, using your own cable is still a necessity.

Setting up the Forté is simple, and it's painless enough that it won't be a chore to take the Apple Watch charger in and out of the stand. There's a little chrome-colored plastic cap that snaps off of the top, and the charging puck fits neatly into the silicone-coated chrome arm.

It works with both the thicker Apple Watch Sport charger and the thinner standard Apple Watch charger. The charger for my stainless steel Apple Watch was a bit recessed when nestled into the arm of the Forté because of its thinner design, but it was still able to hold my Apple Watch in place with no problem.

Once the charging puck is in place, the chrome cap can be put back on and the cable can be routed down the arm of the Forté, where it's directed to the back of the stand. The cutout on the back of the arm of the Forté is fairly deep and holds the Apple Watch cable securely, so there's no danger of it coming out. In this groove, the cable looks tidy enough, but I would have preferred a design that kept the cable entirely out of sight and didn't look somewhat unfinished.

Making the cap that fits over the Apple Watch charger out of plastic might seem like an odd choice when the rest of the Apple Watch stand is made of metal, but because it's plastic, there's no danger of it scratching the Apple Watch during charging.

Twelve South clearly put a lot of thought into the design of the Forté, because it works well in any orientation and with both closed and open-loop bands. When used with an open loop band like the Sport Band, the black leather covering the base makes sure no part of the band is scratched.

When used with a closed loop band in portrait mode, the band fits over the bend in the arm of the Forté, keeping it in place. My sole complaint here is that the arm is actually a bit far from the charging puck. My bands (and my wrists) are on the smaller side, so when closed up, I need to make them bigger in order to fit them on the stand.

Because of the bend in the arm of the Forté, even heavy bands like the Link Bracelet are held in place with no problem, and there's very little chance the Apple Watch will be knocked off the stand accidentally thanks to that extra layer of security.

The Forté is one of the pricier standalone Apple Watch stands on the market, but its build quality, its careful design, and its versatility make it worth the cost. Whether you prefer to charge your Apple Watch in portrait mode or take advantage of landscape mode for the Nightstand feature, the Forté supports it.

With its curved arm and its soft leather base, the Forté also works with all Apple Watch bands or as a platform for the iPhone, and this ability to work in a multitude of ways is undoubtedly why Apple chose to stock the Forté in its retail stores.

The Forté's chrome aesthetic is not going to appeal to all users because it doesn't match all Apple Watches, so for that reason, paired with the high price tag, some people may prefer to go with other Apple Watch stand options on the market.

The Forté can be purchased from the Twelve South website for $59.99 and it is also available in Apple retail locations in the United States and Canada.

runeapple
It kinda looks like something you'd find in a doctors or a dentist to me :p
Score: 4 Votes (Like | Disagree)

Fzang
This watch stand fetish has got to stop.
Score: 3 Votes (Like | Disagree)

khaosuser
I love Twelve South but this is pretty bad.
Score: 3 Votes (Like | Disagree)

honestly, if I see one more MR article about a damn watch charging stand...

What will happen? You'll read it, go to the comments and let us know?

This watch stand fetish has got to stop.

You took the words out of my mouth. And MacRumors is obsessed with them....it's becoming really bloody annoying that every other article on here is for a sodding watch stand....:mad:

How hard is it to ignore? Surely after reading the title you just scroll on past it? That's what I do with iPod related articles as I don't have (and never really had) any interest in that family of devices.

Back on topic, it's good to see stands with nicer build quality. One of the reasons I prefer iOS to Android or Windows Phone - the busy accessory ecosystem.
Score: 3 Votes (Like | Disagree)

Someone needs to explain to Ms Clover that often less is more. A couple of paras and a wrap-up would have been enough. Or is she paid by the word?

MR is hard at it selling us junk since iOS 9 blocks all their ad revenue.

Surely there would be more interesting accessories out there to write about than watch stands.

Watch stand. An entire bedroom stand for your wristwatch.

Read the words again and think about how stupid this sounds.
Score: 1 Votes (Like | Disagree)

Aluminum213
One of the worst looking designs twelve south has done
Score: 1 Votes (Like | Disagree)
Read All Comments