Earlier this year, Apple expanded its Made for Apple Watch program to include Apple Watch stands with integrated chargers. Popular accessory maker Belkin has now worked with Apple to develop the an Apple Watch stand with an integrated magnetic charger, which also includes a built-in Lightning connector for charging an iPhone.

The new Charge Dock for Apple Watch and iPhone is the very first third-party product to incorporate a Lightning connector and a charging puck for the Apple Watch, letting both an iPhone and an Apple Watch charge through the dock without the need for user-supplied cables. 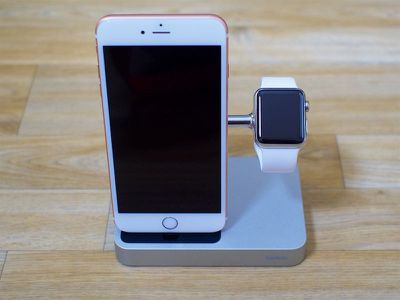 Ahead of the launch of the Charge Dock, I went hands-on with it to see how it measures up to other Apple Watch and iPhone charging solutions on the market and whether it's worth its $130 price tag.

Belkin's Charge Dock consists of an aluminum platform with a built-in Lightning connector for the iPhone and a chrome arm that houses an Apple Watch charging puck. It's a simple, unobtrusive design that fits well into any decor, but it does only come in silver, so it's not going to perfectly match all iPhones and Apple Watches.

The mix of a matte aluminum base and a shiny chrome arm may not be appealing to everyone, especially with the black accents on the base where the iPhone rests and the black detailing on the back of the Apple Watch stand.

On the bottom, there's a grippy surface so it won't move around on a surface, but even without the rubber grip, it's heavy enough that it wouldn't shift around. Overall, the dock is well-made and has a solid build. With the exception of the integrated charger, it's all metal and feels like it could stand up to a good amount of abuse.

The biggest draw of the Charge Dock is having a compact place to charge an Apple Watch and an iPhone simultaneously without the need for multiple charging devices and multiple cables. Since all of the cables are built into the dock, it's able to charge with a single power adapter.

I appreciated only having one cable to plug in, but I do wish Belkin had put more effort into the design of the cable. It's a relatively thick black cable with a sizable power adapter at the end and it doesn't match with standard Apple cables at all. It's a minor detail and an even more minor complaint, but with a dock priced at $130, it would be nice to have a cable that fits in with the Apple aesthetic. For the record, the cable is 1.5m, so it should be long enough to reach an outlet near the ground when on a desk or table.

The iPhone sits on the base of the Charge Dock, on top of the built-in Lightning connector. Belkin made the connector adjustable using a wheel at the back of the dock so it can be lowered or raised depending on whether an iPhone is bare or in a case. It's a great feature that makes the stand compatible with a whole range of cases.

My iPhone 6s Plus fit securely on the dock both in a case and without one. There was no danger of it coming loose or shifting when accidentally knocked. The dock is also able to be used to charge an iPad mini and an iPad Air 2, but tablets don't fit comfortably on the base and they can't be charged when an Apple Watch is in place because they overlap with the Apple Watch charger.

Anyone who has an Apple Watch knows that this isn't the strongest of connections. Several times while testing the dock, I knocked my Apple Watch out of place either by removing the iPhone from the Charge Dock or by accidentally bumping it on my desk. There are several other Apple Watch docks on the market that use this same standalone design, but the difference between those docks and this dock is the addition of the iPhone. Putting my iPhone on the dock or taking it off has the potential to jostle the Apple Watch.

I also had some trouble getting the Apple Watch to remain straight on the charger because it had a tendency to rotate around even with a simple tap. I didn't think the loose connection was a huge problem when used on a desk, but I'd use caution if this dock is going to go in a high traffic area where the Apple Watch could potentially be knocked onto the floor.

With even the slightest tap or bump, my Apple Watch would rotate around like this instead of sitting straight on the dock
Belkin's Charge Dock works and looks best with a closed-loop band, so I folded up my Sport Band each night before putting it on the charger. It's possible to leave it open, but I did bump it more often with the open band just because there's more to get in the way.

Update: It's come to my attention that the Belkin Charge Dock ships with an additional plastic attachment for the arm to provide a stable base for heavier Apple Watch bands like the Link Bracelet. It attaches to the back of the Apple Watch charging puck to hold up close-loop bands and add stability. With the plastic attachment in place, the Belkin Charge Dock should work well with all Apple Watches, even those that are on the heavier side.

The Apple Watch sits on the Charge Dock vertically, which means it's not going to work with the new Nightstand mode introduced in watchOS 2. It does angle the Apple Watch slightly so it can be viewed on a bedside table, but it's not something I'd want to be fumbling with in the middle of the night to see the time due to that weak magnetic connection.

Belkin's Charge Dock is priced at $130, which is expensive, but understandable. I'm sure built-in Apple hardware and certification for that hardware don't come cheap. At $130, it's the equivalent of paying $65 for an Apple Watch dock and $65 for an iPhone dock - not an exorbitant price, but it may be more than most people would spend.

For that price tag, you're getting fewer cables and a compact solution for charging multiple devices at once. That's not going to be worth the price for everyone, but for people looking for an all-in-one solution, it's a reasonable price to pay for convenience.

The single biggest flaw with this dock is the connection between the Apple Watch and the charger. It's not a deal breaker, but it's something to be aware of because some caution needs to be exercised when accessing the iPhone on the charger when the Apple Watch is also in place.

The Belkin Charge Dock for Apple Watch and iPhone is available from the Belkin website for $129.99. It will also be available at Apple.com and at Apple's retail stores. 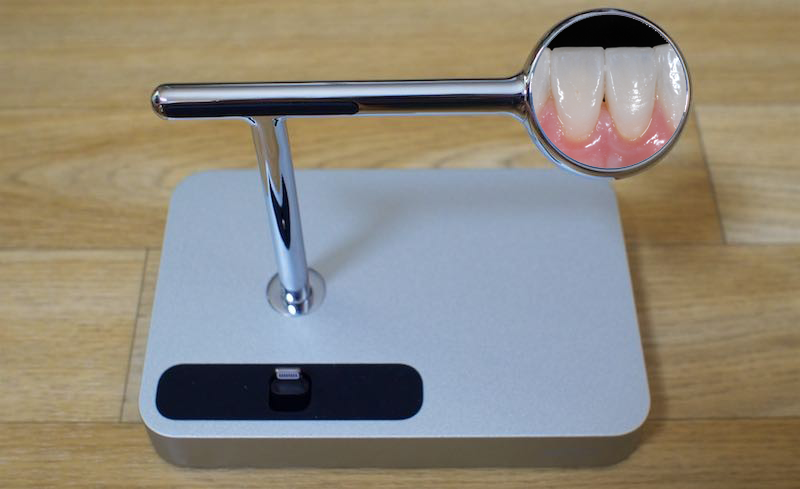 Wow, That's ugly. Why doesn't Jony boy design his own?

...and what about nightstand mode??

If Jony Ive is the one that designed that, you'd be praising how it is the most functional and beautiful charger ever.
Score: 22 Votes (Like | Disagree)

mattopotamus
Yet they somehow made 1 fatal flaw....it does not look like it works with nightstand mode.
Score: 15 Votes (Like | Disagree)

...and what about nightstand mode??
Score: 9 Votes (Like | Disagree)

4jasontv
But does it pass the pet test? Can the kitty rub on it without knocking the phone or watch off? How much puppy tail can it withstand? These are the questions we truly need answered!
Score: 9 Votes (Like | Disagree)
Read All Comments