Apple offers protection for the iPad Pro in the form of a Smart Cover and a Silicone Case for the back of the device, but Apple's products are priced rather high at $59 and $79 respectively, for a total price of $138 for complete iPad Pro coverage.

Luckily, third-party manufacturers have already started coming out with some clever cases and covers for the iPad Pro, and one of the first available rear shells comes from popular accessory maker SwitchEasy. The iPad Pro CoverBuddy is SwitchEasy's first product for Apple's tablet, and it's designed to work alongside Apple's own Smart Cover and Smart Keyboard. 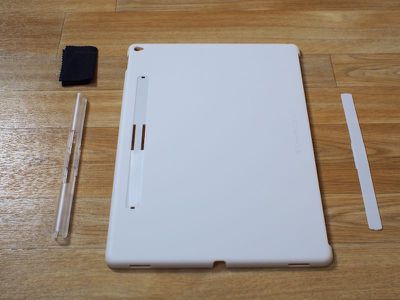 SwitchEasy funded the iPad Pro CoverBuddy through Indiegogo, but now it's ready to ship out to customers. While the Indiegogo campaign was still ongoing, SwitchEasy sent me a prototype CoverBuddy to check out, which I've been using for the last week.

CoverBuddy's polycarbonate material isn't going to protect the iPad Pro from serious damage, but it feels sturdy enough to protect it from the scratches, dings, and minor drops that occur from day-to-day use and travel.

The CoverBuddy leaves all of the ports and the rear camera accessible with precise cutouts, and it has a Lightning port cutout that's able to accommodate the Apple Pencil for charging purposes. On the back, there's a removable plastic Apple Pencil holder, which is actually quite versatile.

It keeps the Apple Pencil in place on the back of the iPad Pro so it doesn't get lost, and when used on a desk or a lap, it props the iPad Pro up at a slight angle that's ideal for drawing or playing games. SwitchEasy's calling this "Sketch Board" mode, and I found it to be useful for writing and sketching.

It's fairly easy to get the Apple Pencil in and out of the built-in holder to use it because it's open at the middle. A quick slide with a finger is enough to remove it, and putting it back is as easy as sticking it into the holder.

When an Apple Pencil isn't in use, the Pencil holder snaps off of the back of the CoverBuddy and can be replaced with a thin strip of plastic that covers the holder. The holder itself can be used on a standalone basis to keep the Apple Pencil safe in a bag, but it's not the most elegant solution when not attached to the case.

Having an additional piece of plastic that covers the Apple Pencil cutout area is a bit of an imperfect solution because it's easy to misplace or lose. I'm fairly well organized, but I still have a tendency to misplace the odds and ends that accessories sometimes ship with. I also had some trouble getting the plastic cover to stay in place, but SwitchEasy has told me small manufacturing issues like this will be ironed out with the final release of the CoverBuddy.

The CoverBuddy is designed to stay on the iPad Pro at all times, but it's easy enough to take it off if you want to use the iPad Pro sans case. It snaps off at the corners and takes only a couple seconds to remove. Given the rigidity of the material I worry that it could crack from the force of removing it, but that didn't happen during the time that I tested it.

SwitchEasy's CoverBuddy isn't quite as premium as Apple's own Silicone Case for the iPad Pro, but it offers full rear protection for the tablet in a slim form factor that preserves its thin design. At $39, the CoverBuddy is reasonably priced and it works well with existing Apple accessories.

The add-on Apple Pencil holder is useful because it keeps the $99 accessory close at hand and it provides a comfortable drawing angle when used in a lap or on a desk. I do wish SwitchEasy produced a version without the Apple Pencil holder for those totally uninterested in it, but the existing CoverBuddy is convertible and suitable for use with or without an Apple Pencil.

If you're looking for a rear shell solution that's more affordable than what Apple offers, the CoverBuddy is definitely worth checking out.

It's worth noting the CoverBuddy is a product that's been around for awhile, so it's not something that's untried and untested. SwitchEasy has been making CoverBuddy cases for Apple's iPad lineup for some time, and it's received largely positive reviews from media outlets and buyers.

The CoverBuddy for iPad Pro can be pre-ordered from the SwitchEasy website for $39.99. Orders are expected to ship on December 14.

Update 5/3/2016: SwitchEasy also makes a CoverBuddy designed for the 9.7-inch iPad Pro, available in Translucent Black, Translucent Clear, Space Gray (rubber coated), and Rose (a pink shade designed to make the Rose Gold iPad Pro pinker. It's priced at $29.99 and can be purchased from the SwitchEasy website.

I can't take a review seriously that offers a giveaway and a direct link to buy the product. The omission of the regular "pros" and "cons" list is suspicious too.

Sorry. I've been working on a lot of reviews lately and I left out a pros/cons list on accident. Wasn't intentional. Thanks for pointing out the oversight -- I've added it in. Review was written before SwitchEasy offered to give some of the cases away, and I agreed to the giveaway because it's always nice to offer you guys free stuff when we can. My reviews are always unbiased regardless of whether or not a review includes a giveaway. I'm not compensated by the company offering the review product and I have nothing to gain. By the way, we always offer links to purchase in all of our reviews because it's convenient for people who might like the product.

Add to that this quote and I find it even more suspicious:

I also had some trouble getting the plastic cover to stay in place, but SwitchEasy has told me small manufacturing issues like this will be ironed out with the final release of the CoverBuddy.

It's true that I had a prototype unit, and SwitchEasy told me up front that it was rougher than the finished units. I chose to take them at their word because this is a seasoned manufacturer that has produced CoverBuddy cases for previous iPad generations that have been well received and positively reviewed. I'm happy to get a production unit CoverBuddy and update the review. The plastic cover for the Apple Pencil slot is definitely fiddly (it takes some patience to get it in place), and as I mentioned, I don't really like the look of it. I would much prefer a CoverBuddy that didn't have this feature for people who don't plan to use an Apple Pencil.
Score: 2 Votes (Like | Disagree)

jmgag03
The single biggest issue I have with my Ipad Pro, which I like very much, is that there is no place to put the pencil. The pencil is incredibly annoying to carry around. It is very expensive and easier to lose than your average pen. Mine currently has a paper clip scotched taped to it. Microsoft said in the Surface Pro 4 launch that users complained there was no place for their pen. That will be a large complaint of iPad Pro users too. Its really maddening they made the pencil far less usable by not including some way to attach it to a pocket or a case.

I can't take a review seriously that offers a giveaway and a direct link to buy the product. The omission of the regular "pros" and "cons" list is suspicious too.

Add to that this quote and I find it even more suspicious:

I also had some trouble getting the plastic cover to stay in place, but SwitchEasy has told me small manufacturing issues like this will be ironed out with the final release of the CoverBuddy.
Score: 1 Votes (Like | Disagree)
Read All Comments